Can We Stop Saying Hillary Clinton Has a ‘Duty to Disclose’ Medical Records? 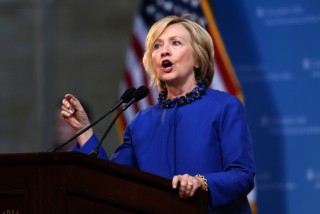 The debate over disclosure of a president or would-be president’s health isn’t new. But (not surprisingly), because we’re talking about Hillary Clinton, Americans are treating health like a groundbreaking campaign issue. Yesterday, after Secretary Clinton’s episode following the 9/11 memorial service, public outcry erupted, demanding that she publicize details about her health. The Washington Post even got in on the action and published an article, which ended:

Initially, it seems perfectly reasonable to declare that a presidential nominee has a “duty to disclose” his or her health. But as a general premise, the mere fact that the public has a rabid interest in something doesn’t, without more, create any duty to disclose. After all, the public would likely have great interest in many sensational and lurid aspects of the lives of both nominees; but interest alone is insufficient to create an obligation to shed the cloak of privacy.

As a nation, we deeply value our privacy, particularly with respect to health-related information. Since 1996, we’ve had HIPAA, a federal statute that protects the confidentiality of personal medical information. HIPAA is not merely an afterthought within the medical community; rather, HIPAA regulations are central to the shaping of the pharmaceutical, insurance, and patient-care industries. If we go to such lengths to ensure this privacy, it’s a major departure to declare that anyone must disclose his or her own health information.

Of course, many will be quick to point out that the President of the United States, by virtue of his or her position, has implicitly agreed to give up many of the rights enjoyed by ordinary citizens. That’s certainly true. But even a president’s surrender of rights is not sweeping and unmitigated. And I think if we’re talking about giving up rights, the entitlement to keep the functions of one’s physical body personal should probably be the last to go. Furthermore, from a purely logical standpoint, there’s no greater reason to publicize a presidential candidate’s health than there is to publicize that of other important leaders; State governors, military generals, cabinet members, and judges also make critical decisions that affect millions of people. If power creates a true duty to disclose, then it doesn’t stop with Hillary Clinton.

Some will argue that a release of Secretary Clinton’s medical information is uniquely critical, because health information is relevant to voter choice. That’s another argument that sounds valid, but just isn’t true on any real level. American voters aren’t likely to choose Donald Trump over Hillary Clinton on the basis that he’s less likely to suffer an illness.  Hillary’s health may give Trump the opportunity to send out some obnoxious tweets, or for his supporters to scream a new sound bite; but no one is going to abandon a left-leaning ship to jump on Trump’s raft of insanity over a bout with pneumonia.

A 2004 Gallup Poll addressed exactly the issue of the importance of health information to voters. While 4 in 10 Americans polled supported presidential release of medical records, far fewer indicated that the results would affect their vote:

“When Americans were asked in late July** about whether Kerry’s bout with cancer concerned them, 92% said they were not concerned that this would interfere with his ability to serve. There appears to be a rare instance of bipartisan agreement on this question: Republicans and Democrats appear equally unconcerned that Kerry’s bout with prostate cancer might create problems that affect his ability to serve as commander in chief.”

The bottom line: we’d like to know about politician’s medical information. But that’s just because we’re just curious. Conflating the public’s thirst for intimate details with a duty to make those details available is as wrong in this context as it would be in a courtroom. Many a jury would love to hear a juicy backstory, but such craving makes the backstory neither obligatory nor even relevant.

America also has a long history of overlooking serious health conditions when employing a president — Nixon’s depression, Reagan’s four surgeries, Eisenhower’s heart attack and stroke, Roosevelt’s polio, Wilson’s stroke, and Kennedy’s Addison’s Disease – just to call out a few. Generally, we know that physical limitations have no great impact on a president’s ability to lead our nation. Furthermore, the nature of medical information is unique in its likelihood to be misunderstood or interpreted without context. In 2008, the New England Journal of Medicine published an article warning that the use of Barack Obama’s and John McCain’s health information during the campaign potentially opened the door for even more invasive practices, such as sharing candidates’ DNA information.

Using genetic information to disparage opponents has no place in presidential campaigns.”

Although the debate over Hillary Clinton’s health relates to medical conditions and not genomic information, the concerns are essentially the same; a call to invade the privacy of a potential president risks our collective privacy as much as it tempts us to misuse the information yielded.  In an election where candidates are widely separated ideology, there is no need to create new non-issues on which to judge them.  Public zeal to learn about Secretary Clinton’s health borders on the prurient — and while this campaign has normalized the inappropriate to an alarming degree, this would be a good place to take a step back and reflect on what we should be valuing.