Calm Down Folks, Trump Attorney’s Emails With Russian Contacts Are No Smoking Gun 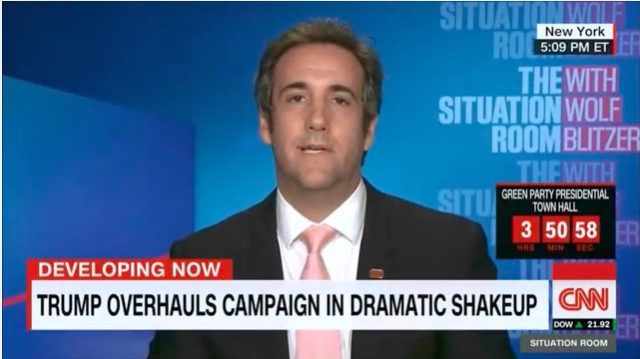 Ready your geiger counters for outrage readings from the media and Hashtag Resistance hordes.

The Washington Post then tag-teamed Mr. Cohen by reporting on yet another email chain–this time between Cohen and the Kremlin’s so-called “top press aide,” Dmitry Peskov. This correspondence appears a bit more anodyne and apparently focuses on a potential Trump-branded real estate deal in Moscow.

So, let’s take a look at some of the verbal charges likely to ensue from this latest chapter in the forever-unfolding Russian melodrama. While the emails are definitely interesting, as you will see from this analysis, they are certainly no smoking gun that proves Cohen — or anyone from the Trump team for that matter – are guilty of a crime.

Treason is the big, bold, beautiful word on everyone’s lips. It’s also the most inappropriate.

In U.S. law, treason has a very limited legal definition. It is one of the original crimes against the state listed in the U.S. Constitution. Located in Article III, Section 3, the relevant language reads:

“Treason against the United States, shall consist only in levying War against them, or in adhering to their Enemies, giving them Aid and Comfort. No Person shall be convicted of Treason unless on the Testimony of two Witnesses to the same overt Act, or on Confession in open Court.”

A different definition is codified at 18 U.S. Code § 2381. This additional definition adds a slight modification to the original language. It reads:

Let’s stretch this as far as we can.

First of all, it’s quite obvious that no one in Trump’s orbit is accused of or has levied war against the United States. So, that’s out. But what about “adhering to their Enemies [and] giving them Aid and Comfort”? That doesn’t work here either.

The U.S. does not have any official state enemies–at least not at present. America is currently only legally at war with terrorists and those who harbor or aid them. Russia is not a terror-sponsoring nation, rather, Russia has actually played an indispensable role in the battle against Daesh/ISIS/ISIL and other radical Islamic terrorists in the Middle East.

Stretch the definition of “treason” as far as you want–you’ll only come up with blinkered hot takes in Salon.

As we’ve noted before: the concept of legal collusion is likely only a legal term of art viz. antitrust law.

But, if we take a step back and look for other codified violations of the law, we can easily find something that might look like, walk like and talk like collusion. At least superficially.

That law would be the prohibition against foreign election interference. It is codified at 11 CFR 110.20. Section (b) states:

“Michael I arranged for Ivanka to sit in Putins [sic] private chair at his desk and office in the Kremlin. I will get Putin on this program and we will get Donald elected. We both know no one else knows how to pull this off without stupidity or greed getting in the way. I know how to play it and we will get this done. Buddy our boy can become President of the USA and we can engineer it. I will get all of Putins [sic] team to buy in on this.”

In this email, Sater is certainly offering something to Cohen. It’s no stretch here to say that this is an offer of receiving help from Vladimir Putin and his team But it is entirely valid to question whether that offer was ever anything more than bluster from an eager underling.

Let’s take the offer at face value. We’ll operate on the assumption that Sater was authorized by Putin to make such an offer or plausibly could have delivered. The real legal question, then, is whether that offer constitutes a “thing of value…in connection with [an] election.”

In one sense, of course Sater’s offer qualifies as an offer of a thing of value in connection with an election. He’s explicitly discussing ways he can help Donald Trump become president of the United States. Even the most inept, red hat-wearing observer would have to admit that a candidate having the Russian Federation’s president and ruling party apparatus at his disposal would be an electoral boon–as long as it all stayed under wraps. But this all sort of misses the point.

In the statute, “thing of value” is most accurately interpreted by the company it keeps. This would entail something tangible, like a donation, campaign ads, or phone banking software–possibly even simple physical labor like helping to solicit funds or even taking part in phone banking–something more than just a promise would probably be necessary here. Sater’s offer of getting Putin “on this program” and getting Putin’s “team to buy in” is absolutely scandalous if there’s even a whiff of feasibility, but it would be hard to see how they’d satisfy the statute.

There’s also an additional hiccup. Further on, the statute reads:

These sections would require some sort of affirmative steps on Cohen’s part to accept Sater’s promise of Putin’s help. It’s not clear that Cohen ever did any such thing and the Times story does not allege that this occurred. In fact, when Cohen’s response to Sater’s offer is mentioned, he appears to dismiss it entirely. Cohen said, of Sater, “He has sometimes used colorful language and has been prone to ‘salesmanship,’…I ultimately determined that the proposal was not feasible and never agreed to make a trip to Russia.”

Critics may contend that Cohen’s decision to even review the offer would qualify as unlawful. While certainly not a smart move, it’s not at all clear what exactly Cohen is referencing–and it would behoove everyone to remember that Cohen is likely to contend the overall correspondence was simply in reference to a potential real estate deal that fell through. His argument would probably be that Sater’s electoral offer came out of the blue or was never taken seriously in the first place–and was simply abided as part of doing business.

Of course, that’s all speculation and this exchange should not be dismissed out of hand. Under a less exacting reading of the above law, Sater and Cohen could find themselves in some trouble. Basically this would require the law to be read thusly, “A foreign national shall not…promise to make a contribution…in connection with [an] election.”

If we understood the statute that way, Sater’s offer itself becomes the thing of value. This wouldn’t be a good legal look for Sater and would potentially implicate Cohen under section (g) of the statute because even an abiding acceptance of Sater’s offer could be read as a violation. As for section (h), the “substantial assistance” aspect of the statute, Cohen so far hasn’t been accused of anything that would qualify–not in the Times story at least.

But let’s broaden our eastward horizons a bit and consider the Post‘s reporting. In Cohen’s email to Peskov, he writes:

“Over the past few months I have been working with a company based in Russia regarding the development of a Trump Tower – Moscow project in Moscow City. Without getting into lengthy specifics. the communication between our two sides has stalled. As this project is too important, I am hereby requesting your assistance. I respectfully request someone, preferably you, contact me so that I might discuss the specifics as well as arranging meetings with the appropriate individuals. I thank you in advance for your assistance and look forward to hearing from you soon.”

If one were inclined to connect alleged dots, this could be read as some variable in a quid pro quo equation.

For example, if Cohen, Sater and Peskov were all found to be discussing these potential real estate deals in the same email chain–or by explicit cross-reference–Cohen would likely be in for a rude awakening from Robert Mueller and his army of attorneys. Such pontificating is probably a bit premature at this stage, though.

Until we have more information, the current verdict here, care of Gertrude Stein, forces us to use an all-but unavoidable political cliche “there is no there there.”