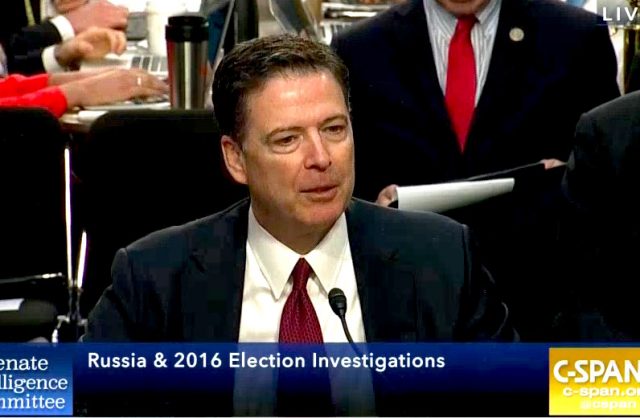 Democrats and Republicans were glued to a CSPAN hearing today. Propelled by quixotic hopes of finding impeachable crimes and closure on Russia, respectively, former FBI Director James Comey‘s testimony in front of the Senate was sure to offer liberals and conservatives something to like–and loathe. Here are ten initial bombshells dropped by Comey on the Senate floor.

1. No fuzz on Russia. James Comey is absolutely, totally, 100% convinced the Russians interfered in the 2016 election campaign. He characterized Russian interference as an “active measures campaign” and considered it a hostile attack against America. Repeatedly questioned by Senator Richard Burr (R-NC) as to the veracity of Russian influence on the 2016 presidential election, Comey stated that he had “No doubt” Russian hackers, at the behest of Russian government officials, attempted to interfere. Laying the romantics on thick, he later said: “They think this great experiment of ours is a threat to them.”

2. Or is there fuzz? Consider this exchange between Senator Burr and Comey:

Burr: “Did you ever have access to the [DNC] hardware that was hacked?”

3. A “matter” of some dispute. Attorney General Loretta Lynch requested the Hillary Clinton email investigation be termed a “matter” instead of an investigation. This request, Comey said, “confused and concerned [him].”

4. The New York Times got it very wrong. In a discussion about alleged Russian collusion with Senator James Risch (R-ID), Comey classified the Times report as completely off-base, saying that the reporting was so concerning it prompted him to canvass the intelligence community to see if he was missing something and that when he discovered it was wrong, he shared his findings with elected Republicans and Democrats. Pressed by Senator Risch on the point, Comey said:

“It was not true…the challenge, and I’m not picking on reporters, about writing stories about classified information is the people talking about it often don’t really know what’s going on, and those of us that actually know what’s going on are not talking about it. And we don’t call the press to say, ‘hey you got this thing wrong about this sensitive topic,’ We just have to leave it there…it’s nonsense. But I can’t go on explaining why it’s nonsense.”

5. The Pee Tape came up. Sorta. When pressed by Senator Burr as to whether anything criminally damaging was contained in the Steele dossier (that’s the pee tape allegations, folks), Comey said he could not discuss it in an open setting. Later on, however, Comey himself brought it up during an interaction with Senator Susan Collins (R-ME), the former FBI director mentioned discussing: “Salacious unverified information which [Trump] adamantly denied…I was very keen not to leave him with the impression that the bureau was investigating him.” Later on, during an exchange with Senator Angus King (I-ME), Comey again refused to comment on the Steele dossier in public.

6. Not fatal, but not great for President Trump. Aside from what will likely be widespread publication of the fact that the president was never personally under investigation, Trump won’t come out of this looking as stellar as his fans will hope. Comey understood Trump’s request to “let [National Security Adviser Flynn] go” as a “direction” and an “order”. He also described Trump’s repeated grooming-like entreaties as attempts to create what the former FBI director characterized as a “patronage” relationship.

7. Documentation, documentation, documentation. At one point, Comey said: “I’ve seen the tweet about tapes. Lordy, I hope there are tapes.” Later on, when pressed by Senator Collins about his infamous memos, Comey explained the reason he shared the contents of them, saying: “I woke up in the middle of the night…and my judgment was that I needed to get that out in the public square. So, I asked a friend of mine to share it with a reporter so that it might prompt the appointment of a special counsel.” TLDR; Trump’s Comey “tapes” tweets prompted Comey’s Trump memos. Update: it turns out that “friend” of Comey’s is none other than Columbia Law Professor Dan Richman–and not, as was widely assumed, Lawfare‘s Benjamin Wittes.

9. Comey was literally scared of Trump. Early on during his testimony, Comey admitted to a certain level of intimidation inherent in the Oval Office. After being asked by President Trump “to let [Flynn] go,” Comey said he would see what he could do. Essentially, he smiled and nodded in order to “get off the phone.” The former FBI director acknowledged that his response was somewhat “cowardly.” Though Senator Dianne Feinstein (D-CA) softened the blow a bit, by telling Comey that he was: “Big and strong.”

10. Lil’ Marco Rubio is a big league team player. Once an object of then-canddiate Trump’s relentless scorn, Rubio distinguished himself as the president’s best defender today. The junior Senator from Florida clarified that Trump asked for three things from Comey: (1) Loyalty; (2) letting the Flynn thing go; (3) a public statement that the president himself was not under investigation.