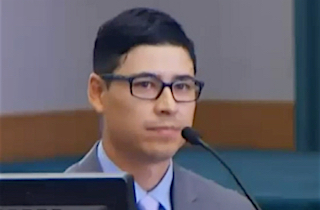 A prosecutor in the Tai Chan murder re-trial has suddenly resigned.

Senior Trial Attorney Ross “Rusty” Prindle resigned Thursday from the Third Judicial District Attorney’s Office, a spokesman confirmed to LawNewz.com.  The resignation came half a day after the prosecution rested its case in chief and handed the trial over to the defense.

“As for the anticipated impact on the trial, we expect it to be minimal. The trial will proceed as scheduled,” the spokesman said.  “Because it’s a personnel matter, I’m not at liberty to comment further,” he said.

Tai Chan is a former sheriff’s deputy who faces murder charges over the shooting death of his partner, Jeremy Martin.  Chan claims he shot Martin in self-defense.  Martin was struck in the back.  Testimony revealed that both men were above the legal limit for driving a car when the shooting happened.  They had been out drinking before the shooting.

Chan has already faced one trial in the case.  The first trial resulted in a mistrial because the jury couldn’t reach a unanimous verdict.

Prindle’s resignation is the newest of several wrinkles surrounding the local police department and the local district attorney’s office in relation to the Tai Chan case.

Earlier during the trial, defense attorneys representing Chan filed a motion to dismiss the case because of alleged prosecutorial misconduct.  The defense accused the prosecution of editing exculpatory statements made by Chan out of police interviews.  The interviews occurred in a squad car and back at the police station after the shooting.  Among the missing statements were Chan’s claims that he was scared for his life and that Martin had shot at Chan first.

The defense spotted the problem by comparing what the jury was hearing in court with transcripts prepared from the original recordings.

The prosecution said that it did not maliciously edit the tapes.

Judge Fernando R. Macias denied the defense’s motion to dismiss the case due to the missing audio, but he did consider the situation suspicious.  He ordered the district attorney’s office to review the matter and to report back to him at the end of the trial.

Both sides had agreed to edit the tapes for time.  The recordings were originally more than six hours long.  However, only the silence between the statements was to be edited out.

It remains unclear whether the editing out of the exculpatory statement or statements was malicious or accidental.

Even before the second trial began, defense attorneys accused the district attorney’s office of “outrageous government conduct” and sought to block District Attorney Mark D’Antonio and his office from handling the case.

A lead detective in the case, Irma Palos, is also suing.  She is claiming she was not given the proper resources to investigate the case.  Palos, however, testified this week that a failure to test certain evidence in the Tai Chan case was an oversight on her part.

Not surprisingly, local reporters have described a strained relationship between the local police department and the local prosecutor’s office.

This is not the first time Prindle has resigned a job.  He reportedly quit his job as a prosecutor in Steamboat Springs, Colorado, eight days before one of several “big trials” was set to begin.

[Editor’s Note:  This report has been updated to better pinpoint the time during the trial at which the resignation was tendered.]