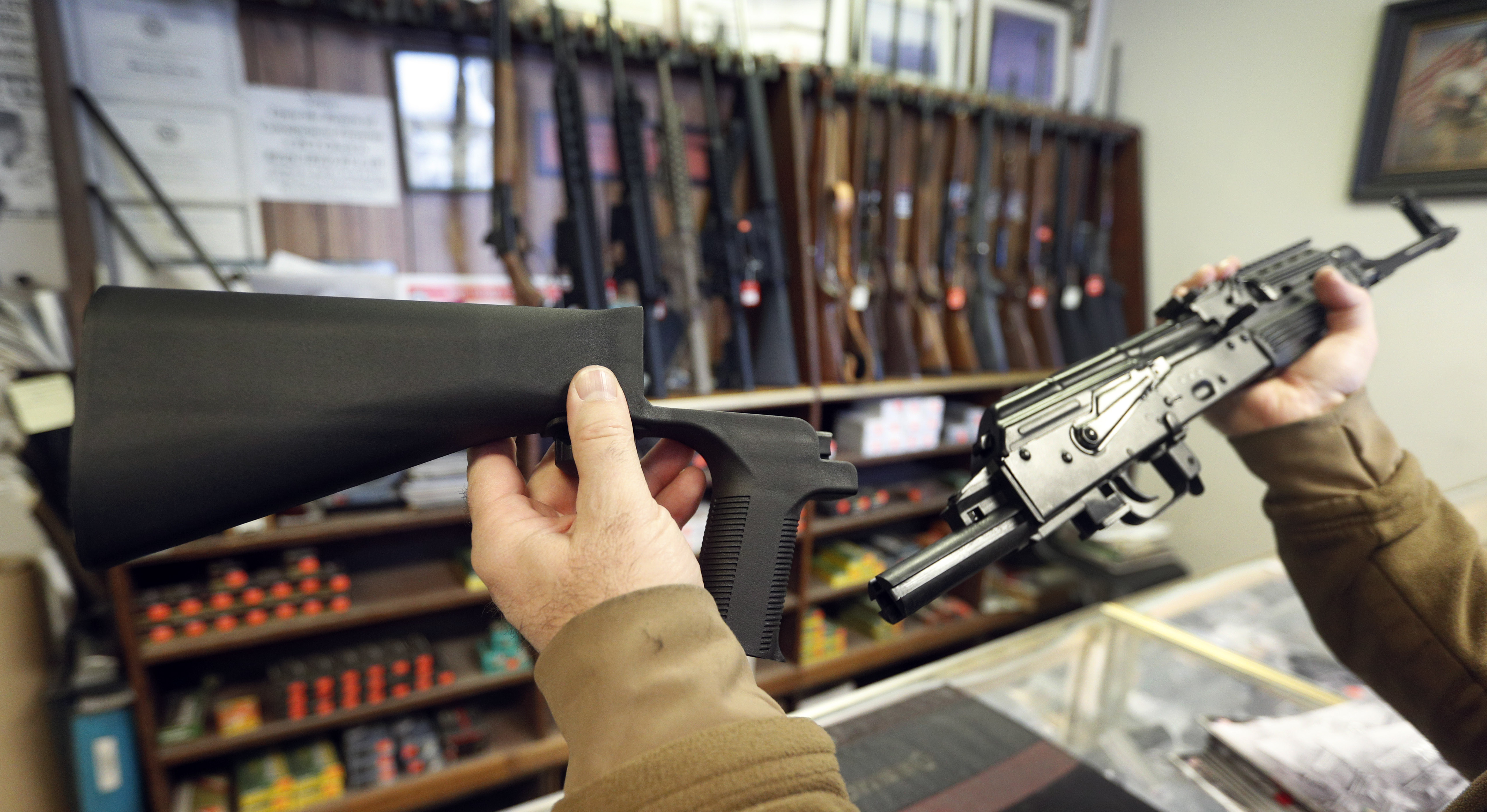 At a medal of valor ceremony Tuesday afternoon, President Donald Trump announced what could be a major policy pronouncement regarding guns and gun violence:

I directed the Attorney General to clarify whether certain bump stock devices, like the one used in Las Vegas, are illegal under current law. That process began in December, and just a few moments ago I signed a memorandum directing the attorney general to propose regulations to ban all devices that turn legal weapons into machine guns. I expect that these critical regulations will be finalized, Jeff, very soon.

Jeff, of course, is Attorney General Jeff Sessions, who appeared to be present for the comments.

The key word here is “regulations.” Trump specifically did not say “statute.” That gives us a key about what might go down here.

Legally, we’re in the realm of the Administrative Procedure Act, which is how executive agencies clarify or, as some critics would say, expand on statutes which are already on the books. It also means the president (well, really, his appointees) call the shots — not congress, at least not directly. Congress passes statutes and leaves fine points to agencies to iron out. Legally, this works most of the time because agencies have expertise in specific industries or areas. The Bureau of Alcohol, Tobacco , Firearms, and Explosives — or ATF — manages gun regulations, to which the ATF has conveniently linked. Administratively, the ATF sits within the Department of Justice in the chain of command, which is why Attorney General Sessions was given the marching orders to look into this possible “regulation.”

While gun control advocates exploded into a rare moment of applause for Trump, legally, all the president’s memorandum appears to be is a move by the president directing his attorney general to tell some non-household-name underling (or maybe even a law school intern) to draft up regulations under the Administrative Procedure Act to deal with the issue. Politically, this allows the president to pay lip service to the increasingly vocal voices demanding some sort of gun control reform after last week’s Parkland, Florida school shooting while blaming someone or something else if the proposed regulations stall.

They might stall. They might fall. They may be overturned. Agency rulemaking cannot go beyond a specific statutory grant from Congress, and certainly agency rules cannot go beyond the Constitution. Legally, administrative regulations are low on the food chain, though they do have profound impact on the way Americans live their lives.

Sometimes, regulations are enacted on an emergency basis, a process which can fast-track them into the rule books. Such emergency provisions are rife for trouble, however, as they are frequently attacked for being overbroad, knee-jerk reactions to emergencies — like a mass shooting. Emergency rules are only allowed if the regular process is “impracticable, unnecessary, or contrary to the public interest.”

More frequently, though, regulations go through a process called “notice and comment” rulemaking. In that process, rules are published, and people have time to comment on them before they take effect. Each step in the process has specific, defined time frames — so it takes a while for the cogs to turn (30 days here; 60 days there; up to 180 days there). The reason for the delays is because the delays give people time to comment on the rule. This means the process will inevitably be dragged through the mud from gun rights advocates and gun control advocates, not to mention industry lobbyists. This process shows both the best and the worst of participatory democracy, as some comments are helpful and professional, but sometimes, emojis of middle fingers and photocopies of buttocks are submitted to the record. (Okay, I haven’t seen those things literally, but I’ve seen the F-word, sexual comments, nonsensical gibberish issued by bots, and etc. submitted purely to stymie the process.) Either way, the notice-and-comment process spits out a final regulation that is significantly different from what initially goes into the wringer. Sometimes — usually? — the final rule is drastically watered down from the proposed rule.

That could happen here. Trump’s order to craft such a regulation doesn’t mean it’ll actually have teeth once it’s on the books — assuming it gets that far.

“Notice and comment” rulemaking is also open to attack in the courts — especially when a litigant thinks an agency has overstepped its authority or acted in the famous “arbitrary and capricious” manner (laid out by Citizens to Preserve Overton Park v. Volpe
in 1971). If that happens, courts can give agencies the upper-cut faster than the Hardy Boys can fight off a shady character and thus wipe regulations off the books. Or, a court could defer to the agency and let the rule stand (this is the frequently-heard “Chevron deference” laid out in Chevron v. Natural Resources Defense Council in 1984).

Congress can also step into this process several ways, since agency regulations are wedged in a constitutional chasm between the legislative (law-writing) and the executive (law-enforcing) branches of government. Congress can wipe regulations away through several processes, including by passing statutes which nullify them, issuing resolutions of disapproval, or de-funding the agency programs which enforce the rules.

The bottom line here is that this process is in no way a sure-fire, clean-cut way to change the world. It could work, but it might not.