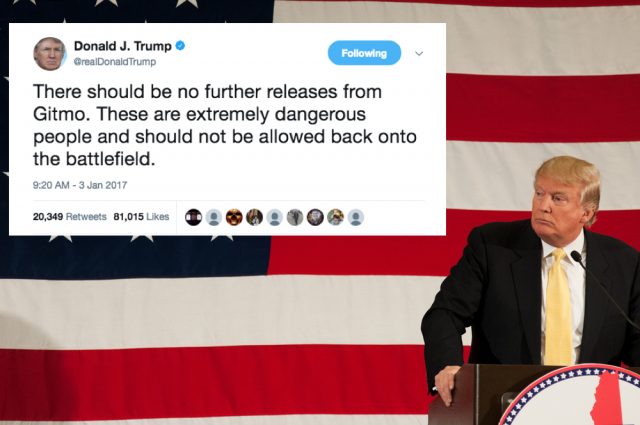 A new lawsuit has been filed against President Donald Trump on behalf of eleven Guantánamo Bay detainees.

Submitted today, the lawsuit argues for the detainees’ immediate release—based on one of Trump’s tweets regarding the controversial U.S. detention center in Cuba. The lawsuit reads, in relevant part:

President Trump, in contrast to his predecessors, has declared and is carrying out his intention to keep all remaining detainees in Guantánamo, regardless of their individual circumstances – presumably even those the executive branch previously determined need no longer be detained. This defiant policy exceeds his authority under the 2001 Authorization for Use of Military Force (“AUMF”), which permits detention only for the narrow purpose of preventing the return of detainees to the battlefield.

To back up the above assertion, the detainees cite a January 3, 2017 tweet from President-elect Trump, which reads, “There should be no further releases from Gitmo. These are extremely dangerous people and should not be allowed back onto the battlefield.”

There should be no further releases from Gitmo. These are extremely dangerous people and should not be allowed back onto the battlefield.

Aside from citing Trump’s tweet, the lawsuit also relies upon accusations of “undifferentiated suspicion of Muslims as a group, an entitlement to animus [against Muslims], as well as reflexive opposition to prior executive action.” All of the above claims are easily sustainable: Trump is clearly suspicious of Muslims, frequently exhibits animus toward Muslims and Muslim-majority countries, and his entire presidency is centered around undoing the legacy of his predecessor, Barack Obama.

Aside from citing to Trump’s own tweet, the complaint is heavily sourced with the parry-and-thrust case law that originated from the George W. Bush and Obama administrations’ joint violations of rights viz. Guantánamo Bay and the indefinite detention regime created by both previous administrations there.

Assessing that Trump is, essentially, uniquely vile, the lawsuit ultimately calls on the judiciary to intervene because Trump’s illegality is even worse than the violations started by Bush and continued by Obama. The lawsuit continues:

Petitioners have participated in habeas corpus litigation that this Court and the higher courts have entertained for years, but this motion, brought by detainees collectively, is different – as it has to be. The two prior presidential administrations released a total of nearly 750 men. They did so by making case-by-case determinations based on an individual detainee’s circumstances in a manner that was purportedly tailored to the executive branch’s interest in national security…The current executive’s open hostility to transferring any detainees, no less those already administratively cleared for transfer, cries out for principled and courageous judicial intervention.

Since Trump has taken office, no detainees have been released from Guantánamo Bay. This is illegal, the detainees’ attorneys argue, as it violates Constitutional guarantees of Due Process and is also in direct violation of the 2001 AUMF–the only statutory authority allowing Guantánamo Bay detentions in the first place. As relief, the lawsuit asks the court to use its broad common law authority to grant the writ of habeas corpus to the plaintiff-detainees.

To be clear, the lawsuit treats Trump’s January 3, 2017 tweet as the stated official policy of the U.S. government in regards to Guantánamo Bay detainees. As a legal argument, this position has quite a bit of merit and a uncertain amount of promise–for two major reasons, respectively:

1. The executive branch does have ultimate authority here–and has already used that authority to block detainee releases across multiple presidential administrations for various reasons or for no reason at all.

2. There’s also precedent for one of Trump’s tweets resulting in relief for someone facing the long, dark halls of the U.S. legal system: Army Judge Col. Jeffrey Nance considered Trump’s tweets when he sentenced Bowe Bergdahl to lesser punishment than widely anticipated.

A spokesman for the National Security Agency (“NSA”) attempted to mitigate the damaging Trump tweet by disagreeing with the president. In comments to Buzzfeed News, the NSA claimed, “Decisions regarding terrorists are made on a case-by-case basis, taking into account legal requirements and the facts of each case.” But that goose-stepping obfuscation is contradicted by what’s actually happening at Guantánamo Bay.

Two of the eleven petitioners, Tofiq Nasser Awad al-Bihani and Abdul Latif Nasser, were cleared for release and placed into exit protocols near the end of Obama’s second term. Once Trump took office, however, those exit protocols were frozen with no justification and the two men now sit in a sort of legal limbo–kept in detention at Guantánamo Bay–by presidential whim alone.

The lawsuit ends with a strong call for judicial intervention:

Executive fiat, untethered to a legitimate purpose authorized under the laws of war, does not permit the perpetual detention of individuals who have already been confined for as many as 16 years without charge. The Constitution and congressional enactments impose meaningful limits on the arbitrary and assertedly unreviewable power of this President. It is the duty of the judicial branch to identify and enforce those limits.

And, because of Trump’s tweet, that judicial intervention may not be too far off.