President Trump is Threatening a Government Shutdown; Here’s What it Means and Why it Could Happen 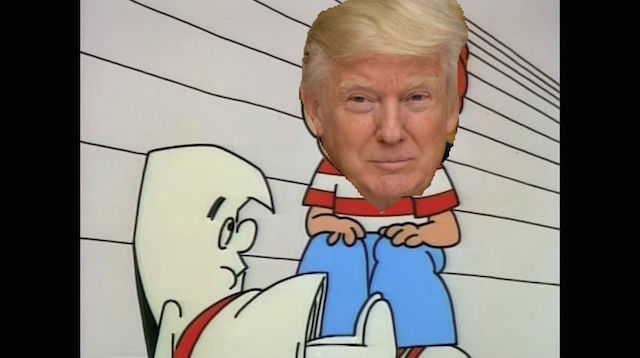 As news of a potential government shutdown reaches a fever pitch, LawNewz has prepared a handy guide to get you through the screeching storm of salty rhetoric and political brinkmanship.

What is a government shutdown?

The basic contours of a government shutdown are fairly simple:

(1) The President and Congress are supposed to agree on a regular budget (known as an “appropriations bill“) which will fund government operations for a full fiscal year; but (2) when the President and Congress can’t agree on such a budget containing the provisions necessary to fully fund government agencies and operation, and (3) if no stop-gap appropriations bill (known as a “continuing resolution“) is forthcoming to stave off a budget gap, the government is required to “shutdown” under a more or less unchallenged interpretation of the Antideficiency Act–a law passed in 1884 which still polices how the country spends money today.

If a government shutdown were to occur, this would result in furloughs (unpaid leave) for non-essential government employees–that’s most of them–and decreased activity for government agencies. National parks and monuments would be closed, but Social Security checks would still be issued. The military and law enforcement agencies would remain afloat, too.

How would a government shutdown play out?

Let’s take this one step-by-step:

(1) President Trump and Congress have yet to agree on a regular budget for various reasons. First of all, lawmakers typically put the kibosh on presidential budgets. Second, many Democrats screamed bloody murder about the impact of Trump’s budget in particular due to the size of the cuts to social programs and the bloat in store for the Pentagon–of course, you can always count on some Republicans to insist that military spending isn’t quite high enough and some have complained about that too.

(2)  In April, Trump signed a continuing resolution allowing the government to fund itself for another week while Congress hashed out the details of a longer stop-gap measure. That second stop-gap measure was passed and signed in May–providing the government operating funds until early September. The budget that shall not be was then released in late May. Trump’s budget and subsequent attempts to pass a full-on budget in Congress have gone nowhere and budget talks were largely eclipsed by the GOP’s never-ending healthcare failure. It’s now late August and September looms–in order to avoid triggering the shutdown provisions in the aforementioned Antideficiency Act, Congess and the President have to agree to another continuing resolution. But Trump has threatened a shutdown if he doesn’t get what he wants–funding for the border wall.

(3) Paul Ryan has warned Trump not to shut down the government over the border wall. But that’s like getting a backsliding alcoholic to promise to pour out a glass of Jameson–even if an entire highball’s worth hits the basin of a sink, you know there’s still a persy bottle in at least one of their pockets. Even if Ryan does have the backbone necessary to stand up to Trump, he couldn’t do much of anything anyway. Same goes for Senate Minority Leader Chuck Schumer. Congress could agree on another continuing resolution, but if Trump wants a shutdown all he has to do is veto any continuing resolution. The House and Senate could then overturn Trump’s veto, but that would require two-thirds majorities in both chambers. Getting to those numbers is an open question.

So, what does it all mean?

Trump has a great deal of leverage here. Though he has threatened a government shutdown before, if he really wants to force the issue, he can do it now with the stroke of a pen. Usually somebody blinks in these circumstances–Barack Obama faced numerous shutdown threats but the GOP only actually went through with it once–but not always. Bill Clinton famously presided over two government shutdowns during his time in office. Ronald Reagan went through three. And George H.W. Bush went through one. Sometimes, though, funding gaps haven’t led to full-on shutdowns. Jimmy Carter and his own party repeatedly faced self-inflicted funding gaps over abortion and spending (though the government wasn’t technically shut down and no employees were ever furloughed during the five times neoliberal Carter and New Deal Democrats in Congress went at each other’s throats.)

The Carter episodes are instructive. It was only after Carter’s Attorney General Benjamin Civiletti issued a strict interpretation of the Antideficiency Act that government shutdowns even became a thing. In no uncertain terms: the U.S. can’t really run out of money. Budget impasses are political decisions used to make political choices. Essentially, this is a form of shock doctrine politics–using an imaginary crisis to exact concessions from political opponents. Budgetary discussions are typically shrouded in Byzantine talk of shortfalls, mechanisms, sequestration, and so on. But the technocratic gobbledygook of bureaucratese is used to obscure the fact that the U.S. government “can no more run out of dollars than a bowling alley can run out of strikes,” as New America’s Matt Stoller has noted.

Trump understands this. He knows most institutions are captive to their own precedents–but also that those precedents can be shrugged off at whim if someone in power really wants to test things. He’s ripping off the veneer of the Rule of Law and making it clear how things work. If Congress doesn’t fund his border wall, he just might shut the government down until they do so.