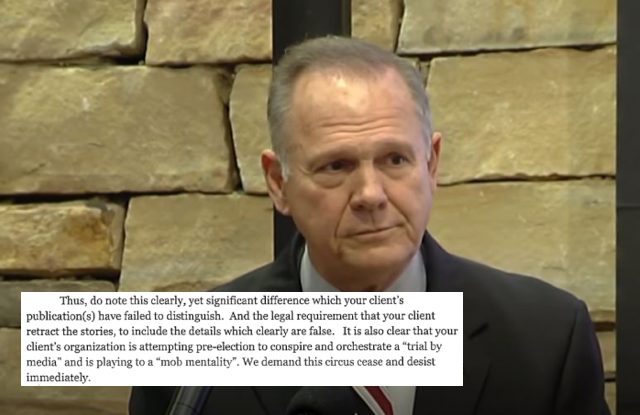 Roy Moore‘s attorney sent a demand letter to local Alabama media today, and it is objectively bad. By any and all measurable standards, it’s just poorly written.

The letter is addressed to Alabama Media Group–which publishes AL.com, the foremost and most popular Alabama publication reporting on the series of sexual assault allegations against Moore originally unearthed by the Washington Post earlier this month.

Setting the tone of the letter is its first sentence. It reads:

Please allow this to serve as notice that our firm has been retained to represent The Foundation for Moral Law, it’s President Kayla Moore and Chief Justice Roy Moore.

For those unfamiliar with primary school punctuation, an apostrophe in the word “it’s” signals a contraction–a combination of the words “it” and “is” which is not what is intended here. So, that’s a very basic typo in the very first sentence. Things quickly unravel further from there.

The next two sentences steer clear of obvious errors, but the closing sentence of the first paragraph gets right back to it. “This letter is provided in anticipating of our firm preparing and filing a lawsuit against your client and its agents.” Remarkably, Garmon uses the word “its” correctly, but subs the incorrect word “anticipating” for the correct word “anticipation” which is probably close enough to how readers feel continuing on.

In the section referenced immediately above, the letter frequently invokes some variation of the words “carelessly,” “maliciously,” “falsely,” “libel,” and “slander.” Garmon may be unfamiliar with grade school grammar, but he is an attorney. These phrases are sprinkled throughout the document with an eye toward scaring AL.com into thinking the Moore camp has any actual, actionable claims for defamation by libel–that is, slander which is printed and broadcast to third parties.

In the interest of brevity, let’s short-circuit a full and thorough legal analysis here to state unequivocally: reporting on the accusations and allegations made by others is not libelous or slanderous. There are certain situations where reckless disregard for the truth of an accusation can get a publisher into such territory, but that’s not what happened here and it wouldn’t be enough to satisfy a defamation claim made by Moore anyway.

Back to the letter: the rest of it is just as ridiculous as the small amount referenced so far.

One section references a (non-existent) duty for AL.com to “preserve and maintain evidence” which wouldn’t be quite so ridiculous if there were an actual lawsuit being filed. But there isn’t, so there’s simply no such duty here. Garmon probably saw this concept referenced once in a case from law school and was having a particularly bad day so he remembered something about it and created this iteration of the concept out of whole cloth.

The claim is further stultified by Garmon’s insistence that he made an evidentiary request. Here’s why that’s off-base: (1) again, there’s no actual lawsuit on which to base such a request: (2) he didn’t even actually make any recognizable evidentiary request.

Another section kindly gives AL.com the opportunity to retract and/or recant their reporting. They’ve already responded and won’t be doing any such thing.

Another section lays out all the claims against AL.com–most of which are not backed up by even an attempt to explain what they’re based on. Now, being a bit conclusory is fine for a demand letter–and the standard Garmon already set for himself isn’t particularly high–but being entirely conclusory about most of the legal accusations flung against someone is particularly bad.

Your client’s organization has made and/or supported defaming statements. This is due to the careless and/or intentionally refused to advance the truth regarding our clients. We also believe that your client, by and through its agents, have damaged our clients by being careless in how they handle headlines and report the contextual of the allegations…Thus, do you know this clearly, yet significant difference which your client’s publication(s) have failed to distinguish. And the legal requirement that your client retract the stories, to include the details which clearly are false.

Let’s just leave this at…okay, Trent. Whatever you say, buddy.