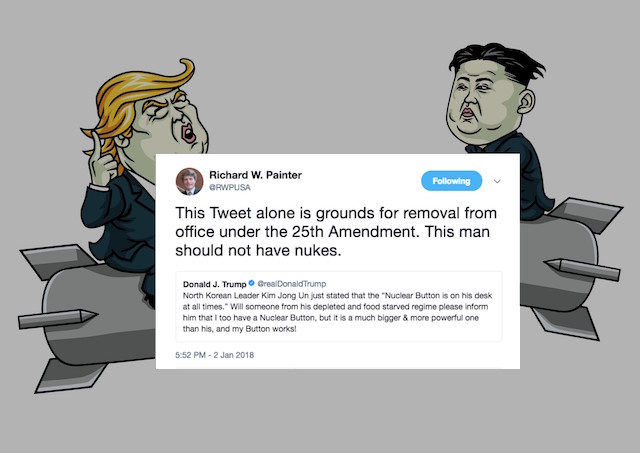 President Donald Trump‘s tweet referencing his ability to fire nuclear weapons at the push of a button is grounds for removal under the 25th Amendment to the U.S. Constitution, according to a former White House ethics attorney.

Richard W. Painter currently serves as vice-chairman of Citizens for Responsibility and Ethics in Washington (“CREW”) and is a professor of law at the University of Minnesota. He previously served as chief White House ethics lawyer for President George W. Bush from 2005-2007.

In the following analysis, I’ll explain why Painter is all-but certainly wrong.

North Korean Leader Kim Jong Un just stated that the “Nuclear Button is on his desk at all times.” Will someone from his depleted and food starved regime please inform him that I too have a Nuclear Button, but it is a much bigger & more powerful one than his, and my Button works!

Trump’s tweet was roundly condemned–as usual–by legal experts, pundits and other professionally serious individuals. But Painter believes the above-referenced tweet is grounds for the constitutionally-provided remedy of removal under Section 4 of the 25th Amendment. (The entire amendment supersedes the removal clause in Article II, Section 1, Clause 6 of the Constitution and was ultimately adopted due to the original clause’s ambiguity.) The relevant section of the 25th Amendment reads, in full:

Section 4 essentially contains two routes for removal of the president from office. The first route, if chosen, would likely result in a Ron Howard film titled “Open Insurrection in the West Wing.” The second route, if certain typically callow politicians are up to the task, would probably result in a Robert Zemeckis movie called “Congress to the Rescue.” Let’s break those options down.

The first route. Open insurrection would make an unlikely hero out of Vice President Mike Pence and the rogues gallery of neocons and right-wing revanchists currently populating Trump’s cabinet. According to this fantastic scenario, Pence’s task would be to marshall a majority of executive department heads to join him in agreement that President Trump is “unable to discharge the powers and duties of his office.”

There are 15 executive department heads (plus the vice president) who make up the cabinet. Therefore, Pence would need eight members of Trump’s current cabinet to break ranks with the president and install the evangelical Hoosier in a bloodless coup d’état–by sending a group-signed letter to Congress. This would make Pence the “Acting president.”

The second route. Congress to the rescue could occur by way of the 25th Amendment’s language regarding “such other body as Congress may by law provide.” One such body has already been proposed by Democratic Representatives Jamie Raskin and Earl Blumenauer by way of H.R. 1987, the Oversight Commission on Presidential Capacity Act. Under the terms of this legislation, an 11-member committee would perform the task previously assigned to Pence’s would-be cabinet mutineers.

For the sake of argument, let’s assume either band of Pence’s confederates–whether hard-right cabinet officials or some combination of congressional centrists–moves to remove Trump. Here’s what happens next:

After the initial removal, Trump could then resume his duties as president by simply submitting a letter to Congress stating that “no inability exists.” This starts a 4-day-long countdown wherein the coup plotters would have to submit another letter to Congress stating that Trump is still “unable to discharge the powers and duties of his office.” At this point, another countdown starts, giving Congress 21 days to decide the issue.

If two-thirds majorities in both the House and Senate agree with the golpistas within those 21 days, then Pence would remain on as “Acting president.” But if Congress doesn’t vote in Pence, et, al.’s favor–or if they don’t take up the issue at all–within that 21-day timeline, then Trump would immediately regain the presidency and “resume” the powers and duties of the office.

For the sake of argument, let’s say this all goes according to plan. In such an instance, Trump could frustrate the entire drama by simply resubmitting his contention that “no inability exists,” and start the aforementioned 21-day countdown over again. This process could be repeated until somebody blinks–in theory ad finitum. So, not only is it entirely unlikely, it’s also probably a pretty huge waste of time.