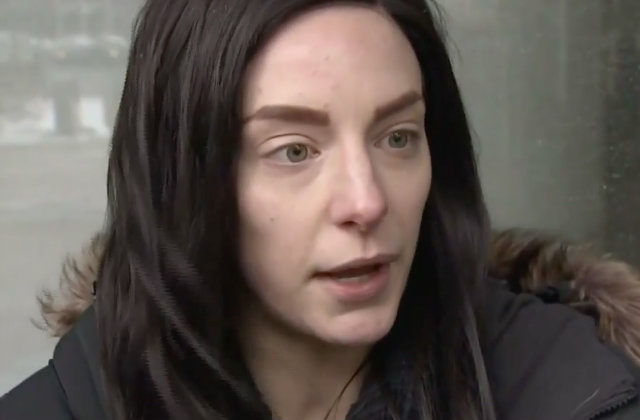 “It’s cold,” their attorney Jeffrey B. Rubin told The Boston Herald in a Tuesday report. “It’s callous. It’s heartless. It’s non-compassionate. It’s un-American — there is no need for it.”

The couple showed up at U.S. Citizenship and Immigration Services in Lawrence, Massachusetts on Jan. 9 to prove that their marriage was lawful, so Fabiano de Oliveira could apply for a green card. Instead, agents with U.S. Immigration and Customs Enforcement arrested him.

The couple has a 5-year-old son.

“I cried for a good five days after,” Karah de Oliveira told the Herald. “But I can’t do that in front of my son because I don’t want him to realize anything is wrong. My husband is in prison. He does not belong in there. My son is without a father.”

Rubin said Fabiano de Oliveira came to the United States illegally from Brazil in 2005, but doesn’t have a much of a criminal record. It only includes a driving without a license charge that even the FBI fingerprint check didn’t discover, he said.

De Oliveira was denied bond Tuesday in immigration court, and is set for a hearing in U.S. District Court on Feb. 7.

“The agency does not target those who may be seeking immigration benefits,” said ICE Enforcement and Removal Operations Deputy Field Office Director Todd Lyons in a statement obtained by Law&Crime. “Any suggestion to the contrary is baseless and without merit. ICE may work with USCIS on certain cases, which may include unexecuted final orders of removal, as determined on a case by case basis.”

“As ICE Deputy Director Thomas Homan has made clear, ICE does not exempt classes or categories of removable aliens from potential enforcement,” Lyons said. “All of those in violation of the immigration laws may be subject to immigration arrest, detention and, if found removable by final order, removal from the United States.”

De Oliveira was arrested by immigration officials in Jan. 2005, but he later ignored a judge’s deportation order, an agency spokesman told Law&Crime. Authorities want to keep him in custody until he’s removed.

That deportation order complicates things for de Oliveira. Immigrants have an easier time getting green cards if they entered the country “with inspection.” That means they had to enter the country legally. Those who entered without inspection face extra barriers.

“If a person has never been in removal proceedings and marries a U.S. citizen, they can likely seek to file for a green card through the marriage if the individual entered with inspection, even if he worked without permission or overstayed the period of his authorized stay,” Professor Lenni Benson, who teaches immigration law at New York Law School, told Law&Crime in an email. “But if a person has any arrests, prior marriages, entry without inspection, they really should seek legal counsel before entering into the adjustment of status process. Many people will find they have to reopen old deportation cases or have to process for their green cards overseas. Sadly, since 1996, we have had a law that is triggered if you travel outside the country and that requires that person to secure a waiver to return.”

Benson described this as “punishment” for overstaying visas or for coming to the country illegally. Most people face a ten-year ban from returning to the United States, and they can’t get the waiver if they lack a spouse or parent who is a citizen or lawful permanent resident harmed by the immigrant’s absence.

“We have 11.5 million undocumented people in our country largely because if people tried to go home to pick up a visa, they would be subject to a bar,” she said.

Benson explained that people are usually arrested at U.S. Citizenship and Immigration Services offices only if that individual faces a final order of removal, or if they were convicted of an offense that could spark removal.

“For example, two shoplifting convictions make you deportable,” she said. “So you go in to apply for citizenship and you can end up arrested and detained.”