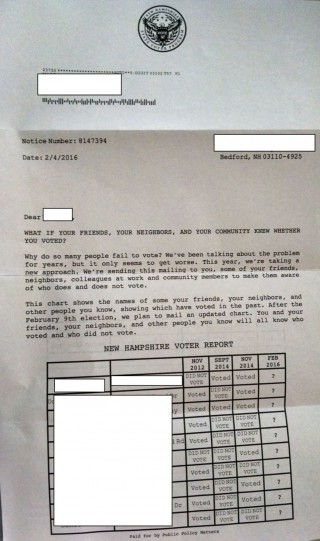 Just one day before the New Hampshire primary, voters in the Granite State received a sketchy letter in the mail attempting to embarrass them into voting in the primary. The letters have angered voters, and raised serious concerns about who is behind the mysterious mailers.  LawNewz.com dug through publically available records, and found the group is linked to a well-known DC lobbying/election law firm, which as recently as 2015 had ties to the Marco Rubio campaign.

The mailer, in small letters, says it was paid for by “Public Policy Matters.” A google search reveals no details about the organization. However, a search of public corporation records in the State of Virginia reveals the organization is linked to Jason Torchinsky, a partner at HoltzmanVogel Josefiak PLLC. The election law firm has offices in D.C. and Virginia, and is very well-known in the campaign finance world.

“Jason knows where the legal line lies, and he has been known to do some boundary pushing,” Paul Ryan, from the Campaign Legal Center told LawNewz.com.

Here is how Bloomberg Business described the law firm in 2012:

“Holtzman Vogel Josefiak PLLC [is] a boutique outfit that specializes in advising organizations that want to participate in the electoral process without disclosing who’s paying their bills. The firm is tied to non-party groups, including super-political action committees, that spent more than $250 million in an effort to influence the 2012 election.”

Federal Election Commission records reveal that as recently as 2015, the Marco Rubio campaign paid this law firm. Bloomberg reports that in 2011-2013 election cycle, the Republican National Committee and Senator Marco Rubio’s campaign, spent $1.7 million for the firm’s services. LawNewz.com reached out to the Rubio campaign as well as the law firm for comment, but have yet to hear back. Public Policy Matters is also incorporated in Ohio as a nonprofit, and is linked to the same law firm (same address listed in both).

In the Ohio filings, they state the group’s purpose is to “further the common good and general welfare of the citizens of the United States of America by educating citizens, policy makers, and leaders about important matters of public policy….”

​​So does this mailer break any law? It is unclear. LawNewz.com has confirmed that the New Hampshire Attorney General is now looking to see whether it violates state law. As for federal law, it looks like the group may have skirted disclosure requirements.

“It is very upsetting,” William O’Shaughnessy, an independent who received one of the mailers told LawNewz.com.​