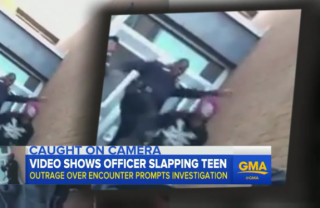 Baltimore prosecutors are investigating a horrifying incident caught on video at a public school. In the footage, which you can see below, an armed police officer slaps a teenager in the face three times and then kicks him, all while a second officer stands by silently. The teen suffered injuries to his ribs and face, according to Good Morning America.

School officials told ABC News that both officers have been placed on administrative leave. They also say the teen, whose identity is being kept private, is not a student at the school, and his presence is being investigated. His attorney says he is a student.