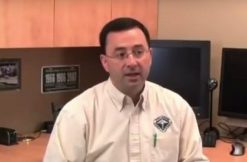 GRAND RAPIDS, Mich. (AP) — A plea deal could be in the works for a former doctor at Michigan State University and USA Gymnastics charged in federal court with obtaining and possessing child pornography.

Documents obtained by The Detroit News and the Lansing State Journal show a guilty plea has been signed by 53-year-old Dr. Larry Nassar.

A formal plea agreement hasn’t been filed with the court.

Nassar faces trial in three Michigan sexual assault cases that include young gymnasts who said they were molested while seeking treatment for injuries.

Nassar and Michigan State also are being sued by dozens of women and girls. Indianapolis-based USA Gymnastics is a defendant in some of the lawsuits.

The Associated Press left messages Sunday seeking comment from an attorney for Nassar and the U.S. attorney’s office in Grand Rapids.