President Obama Tries to Push Through 98 ‘Midnight Regulations’ But They May Be In Trouble | Law News
$promoSlice() doesn't exist!
Opinion 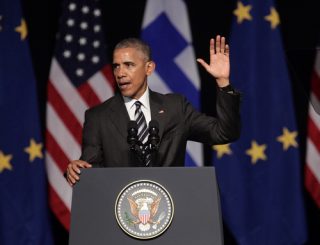 President Obama is spending this holiday season trying to get 98 “midnight regulations” on the books before Donald Trump takes office in January. These last-minute regulations cover things such as commodities speculations, air pollution, immigration, Medicare, funding for Planned Parenthood, investment with China, and student loans. Needless to say, the Republican-led Congress and Donald Trump are a bit miffed that their imagined lame-duck isn’t nearly as lame as they’d hoped.

Before we get into the usual story about how Congress plans to block everything President Obama does, just because he’s President Obama, let’s discuss how these “midnight regulations” even work.  The legislative branch of the federal government (Congress) gets to make laws. The executive branch (the president) enforces those laws. It’s easy to picture what “making laws” means, but “enforcement” is considerably more vague. The most significant way the executive branch enforces laws is by directing federal administrative agencies. These agencies – everything from the IRS to the EPA to the NSA to the DOD – were all created by acts of Congress, but they all answer to the president and are part of the executive branch. When Congress creates these agencies, it does so by drafting broad legislation. Then, the agencies themselves adopt more specific regulations. This makes a ton of sense, because, for example, the folks over at the EPA understand how to implement environmental laws and procedures far better than members of Congress do. When the agencies adopt their regulations, they do so by following an intense procedural framework generally referred to as “administrative law.” Because federal agencies are headed by presidential appointees, this system allows the president, and the rest of the executive branch to be directly involved in the lawmaking process. Essentially, Congress gets to choose if it’s working with plaster or marble, and sculpts the basic shape. Then, the president chisels the details and determines whether the finished product will be the Venus De Milo or The Thinker. This is a two-branch effort, and is a fundamental part of the American system of checks and balances.

When the president makes new regulations that bind federal agencies, those new regulations require a 30 or 60-day waiting period (depending on whether the regulations are considered “minor” or “major,” respectively) before officially becoming law. These waiting periods create an interesting opportunity for an outgoing president to publish what are known as “midnight regulations” on his or her way out of office. Major regulations adopted by November 21 would go into effect on January 20, right before the President Trump is sworn in, and minor ones have until December 21 to get on the books. Once our new president takes office, the agencies have the option to reverse any midnight regulation by writing new regulations, but the typical process used to do so is neither quick nor easy.

“Should you ignore this counsel, please be aware that we will work with our colleagues to ensure that Congress scrutinizes your actions — and, if appropriate, overturns them.”

And President-Elect Trump has vowed that he will cancel “all illegal and overreaching executive orders” and eliminate “every wasteful and unnecessary regulation which kills jobs.” Trump has a history of blustering about his plan to swoop in and eradicate federal regulations, irrespective of the legal realities required for such action.

Congress, however, may have a serious ace up its sleeve. In 1996, the Congressional Review Act  is a Gingrich-shaped law that was enacted as part of the Contract with America Advancement Act of 1996. Under this act, “new” federal regulations (in this case, those passed after May) can be quickly overruled by joint resolution of Congress. So although President Obama may be planning big moves between now and January, we’re definitely in for some Congressional drama along the way.