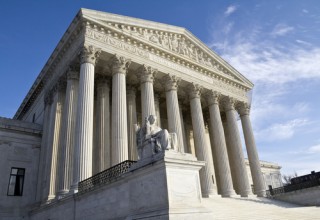 Without Antonin Scalia’s vote, the Supreme Court had only three of the necessary four votes to hear Stormans, Inc. v. Wiesman, and it could have been a real whopper. The eight-member Court voted 5 to 3 against granting cert, and as a result, the Ninth Circuit’s decision will stand. You need four votes to grant certiorari, which means the Supreme Court would have likely heard the case.

Stormans was another one of those cases with a ridiculous concept at its core: that doing business with someone is a form of exercising one’s religious beliefs. We’ve seen the same concept at work in the Mississippi, North Carolina, and Georgia laws that allow wedding vendors to discriminate against LGBT people in the name of God. In the Stormans case, the state of Washington passed a somewhat preemptive law that prohibited pharmacists from refusing to provide the “morning after” or “Plan B” pill on religious grounds. Christian owners of a small, family-owned pharmacy sued, hoping to have the Washington law declared invalid on the grounds that it violates their free exercise of religion. Had Nino still been around, the Court would probably have heard the case, and the pharmacists would quite likely have won.

Scalia would have voted for Stormans to become a friendly companion to Burwell v. Hobby Lobby Stores, Inc. – the 2014 case that allowed certain employers to opt-out of providing healthcare to women on the grounds that allowing women to access birth control violated their Christian beliefs. There’s no question that another decision diluting the definition of “free exercise of religion” would be a really lousy idea. Such a holding would further erode the real meaning of religious freedom, giving way to sanctioned bigotry and discrimination. And while the legacy of a Hobby-Lobby-plus-Stormans duo would have been unquestionably dreadful, it would probably have been unavoidable if the case had made its way before the Court. Unlike most of the other intolerance-dressed-up-as-religion statutes out there, the Stormans case presented some compelling facts and issues that could have warranted striking down the well-intentioned Washington statute.

I could easily imagine five justices being convinced that actually dispensing pills that prevent pregnancy is closer to violating anti-abortion convictions than other behavior the Court has considered. Yes, I am well-aware that preventing pregnancy is pretty different from participating in an abortion – but I wouldn’t bet on anyone other than Sonia, Ruth, and Elena share my certainty on that topic. Dispensing such medication could certainly come closer to violating a person’s religious convictions than providing health insurance could (as was the issue in Hobby Lobby), and it would definitely be closer than a wedding photographer’s doing business with a gay couple. These arms-length transactions still in no way approach the pre-Hobby Lobby standard for “the free exercise of religion,” but the dispensing of medication is definitely closer. Before Hobby Lobby, people were only exempted from following laws on the basis of religion when the behavior at issue was closely related to actual religious practices. Seventh-Day Adventists, for example, were legally protected from requirements that they working on their Sabbath, Amish families were exempt from having to send their kids to high school, and those who practiced Santeria were allowed to sacrifice animals. However, religion or no religion, everyone was expected to pay their taxes, abide by narcotics laws, and avoid bigamy. Basically, until all Hell broke loose in Hobby Lobby, there were reasonable, common-sense limits on what counted as “religious freedom.”

Viewed through the filter of RFRA laws, Hobby Lobby, and their history, the outcome of Stormans would be tenuous at best. But many of the case-specific facts would be irresistible to justices looking to continue Hobby Lobby’s expansion of religious freedom. For example, the American Pharmacists Association has, for many years, expressly approved the “conscientious referrals” of pharmacists at issue in Stormans. And when Washington passed its law in 2007, it became the only state to make conscience-based referrals illegal; that history differentiates the Stormans law from trendier statutes intent on hiding discrimination under a cloak of religion.

The statistics wouldn’t have helped either. The plaintiff pharmacy was a small, family-owned company. It stocked only 15% of the 6000 drugs on the market, and its decision to do so was permissible on a number of secular grounds, including advancing business strategy, catering to niche markets, avoiding certain forms of payment, and attracting undesirable clientele. Plus, only a small fraction of its customers even asked for this medication. And the kicker is that when anyone did ask for it, instead of merely turning her away, the pharmacists made a “facilitated referral” to a neighboring pharmacy such that the client could obtain the pill with relative ease. Those facts, taken together, clearly present a more favorable picture for Petitioners’ religious freedom than did the facts in Hobby Lobby or the NC, MS, or GA statutes. Plus, the Ninth Circuit’s decision to uphold the Washington law conflicts with rulings from by Third, Sixth, Tenth, and Eleventh Circuits. And when the circuits can’t get along, Justices Thomas, Alito, and Roberts often can’t resist reprimanding the Ninth Circuit.

Of course, it’s possible that a majority of the court would have seen through the Petitioners’ nonsense. Several justices surely would have noticed that from the first paragraph in the Petitioners’ brief, it offensively referred to proponents of the law as “pro-abortion groups,” and incorrectly indicated that the law had only been passed as a result of buckling under political pressure. And RBG probably would have noticed that using the telephone to arrange for a woman to obtain the morning-after isn’t much different from putting that pill directly into her hand. And I’m fairly certain that Justice Kagan or Sotomayor would have called out the Petitioners’ for their absurd characterization that the pharmacists refusing to dispense drugs is exactly like animal sacrifices for during Santeria ceremonies.

The Stormans case fell into the dangerous chasm created by Hobby Lobby, and we were only saved from its further damage by Antonin Scalia’s death.   States and individuals will continue twisting the idea of “religious freedom” into something that it just isn’t.  And as it did in this case, one vote may mean quite a lot.