NC Law: Once Women Start Having Sex, They’re Not Allowed To Stop 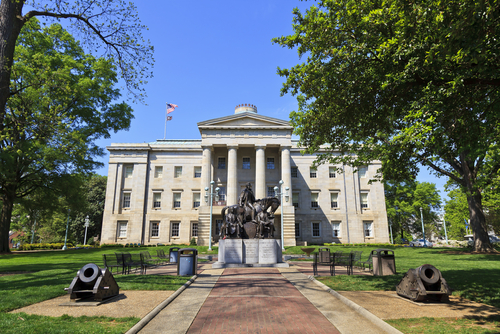 In case you thought that North Carolina’s repulsive laws about sex only centered around intolerance for the LGBTQ community, there’s more. And this time, it’s even worse. North Carolina thinks it’s perfectly cool for a man to commit violent rape, as long it happens after some good foreplay. Sounds like I’m being hyperbolic, right? Yeah, I wish I were. Check out this insanity:

Nineteen-year-old Aaliyah Palmer had begun having sex with a man who pulled her into a bathroom at a party. Midway through, the encounter allegedly turned from impromptu tryst to felony rape when the man became violent, Aaliyah told him to stop, and he refused. When Aaliyah reported the crime to authorities, she learned the harsh truth that the rulings of a backward appellate court can have devastating consequences for crime victims.

According to a 1979 precedent, as long as sex starts consensually, it can’t be rape. In State v. Way, Justice Copeland and the North Carolina Supreme Court overturned a rape conviction because the trial court had instructed the jury as follows:

“consent initially given could be withdrawn and if the intercourse continued through use of force or threat of force and that the act at that point was no longer consensual this would constitute the crime of rape.”

In other words, the trial court judge had both gone to law school and had some common sense. Any first-year law student knows that consent (regardless of whether we’re talking about sexual intercourse, any other kind of touching, the lending of money, the trespass on property, or literally anything else for which a person could give consent) is revocable at any time.  Justice Copeland and the other justices took it upon themselves to change the very concept of consent, though, writing:

“If the actual penetration is accomplished with the woman’s consent, the accused is not guilty of rape.”

It’s unclear whether Justice Copeland knew less about law or less about sex. Like any ongoing activity, sex should (and in most states, does) require consent from its beginning to its end. For consent to be valid in any circumstance, it must be knowing and voluntary; the very definition of consent requires that it last through the duration of the event. Imagine if a person couldn’t revoke consent midway through a medical checkup, a massage, or a haircut – the very concept of consent would quickly become meaningless.

While 1979 was many years ago, State v. Way is not simply a legal relic. It is revitalized every time prosecutors are denied the power to charge a rapist with his crime. Aaliyah Palmer is in the headlines today – but there are many Aaliyah Palmers in North Carolina. Rapes are hard enough to prosecute in states where laws aren’t ridiculous. The last thing we need is for North Carolina to keep its black-letter law from protecting victims who need it most.

If North Carolina can hold its act together, though, there is some legislative relief on the way. On April 3, 2017, state Senator Senator Jeff Jackson introduced Senate Bill S553, entitled, “AN ACT TO PROVIDE THAT A PERSON WHO CONTINUES TO ENGAGE IN INTERCOURSE AFTER CONSENT IS WITHDRAWN IS DEEMED TO HAVE COMMITTED THE ACT OF INTERCOURSE BY FORCE AND AGAINST THE WILL OF THE OTHER PERSON.” S553 is short and sweet and does nothing but say what North Carolinans have known all along – that a rapist is not absolved by the fact that sex may have begun consensually.

Senator Jackson, a former prosecutor, encountered this loophole when his office was forced to dismiss a rape charge on the basis of revoked consent. I spoke with Senator Jackson today, and he told me the following:

“North Carolina is the only state in the country where no doesn’t really mean no. Right now, if a woman tells a man to stop having sex he is under no legal obligation to do so, as long as she initially consented. If sex turns violent, the woman has no right to tell the man he must stop.

This really shouldn’t be a controversial matter. I believe this bill will inevitably pass, and when it does, my bet is it passes unanimously. No one can seriously defend this loophole in our rape law.”

Jackson couldn’t be more right. No one can seriously defend North Carolina’s bizarre consent exception. It’s likely that current legislators are not as much supportive of the State v. Way rule as they are unaware of it. Jackson described peers as being “very surprised” when they learn about the practical functioning of sexual assault law under current North Carolina law. “I have not had any members defend the loophole. Every legislator I’ve spoken to agrees we need to fix this,” Jackson said.

This one really seems like a no-brainer; unfortunately, the same label often applies to conservative state legislatures. S553 is currently stalled in Senate’s Rules Committee, and will likely not become law for quite a while. Jackson has committed to filing the bill again next year, citing the “clear ethical obligation” the legislature has for fixing the “obvious defect” in North Carolina’s rape law.

I applaud Senator Jackson, both for his good lawmaking and his optimism. Something tells me, though, that GOP lawmakers in NC are going to be slow to back this much-needed law. While they may personally understand the need for the law to reflect the appropriate rules for consent, their constituents likely will not. Hopefully, the North Carolina General Assembly will be able to do something the women in its state aren’t permitted to do – change its mind.