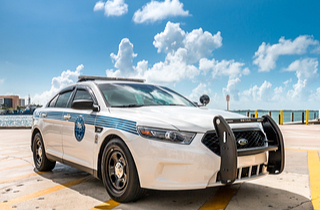 The Miami Police Department is under a policing agreement with the Department of Justice stemming from multiple contested police-involved shootings, so tensions were already high in the city. A new report from Thursday suggests those tensions could come to a boil soon: According to the Miami Herald,  three rookie officers were apparently joking back and forth about using black neighborhoods for target practice.  The exchange using the WhatsApp chat platform included these lines:

“Anyone know of an indoor shooting range in Miami?”
“Go to model city they have moving target.”
“There’s a range in overtown on 1 and 11. Moving targets and they don’t charge.”

The fired officers, Kevin Bergnes, Miguel Valdes (who is of mixed race) and Bruce Alcin (who is black), said they were joking or, as paraphrased by the Herald, “commenting on what they’d seen in the city during their training.” They insisted they had no malevolent intent in exchanging their remarks, but given concerns about how it could look both in terms of optics and potential court cases, they were fired. “It was senseless, young and reckless. It shouldn’t be tolerated,” said Justin Pinn, who sits on a civilian board that tracks compliance with the policing agreement. “Officers are supposed to be guardians not warriors. I don’t think what they expressed reflects the values of the department.”

The president of Miami’s police union disagreed,  saying that while “[the] messages were in poor taste,” he felt they “weren’t in anyway racial.” The fired cops’ lawyer, Stephan Lopez, added that “My clients are young kids. They’re young officers and they were off-duty” at the time of the messages. “I can’t let their careers be tarnished when they engaged in no misconduct.”  He also pointed out that since “two of the officers have black blood pumping through their veins,” it’s “outrageous and ludicrous” to call them racists.

Citing an internal affairs memorandum, the Herald added that Bergnes also joked about using a Bank of America branch as a shooting range because “they’ll even give you some cash.” Later, Valdes added to his comment about the corner of First Avenue and 11th Street being a good location by saying that  “they even run scenarios and pretend that they’re shooting heroin.” Alcin then quipped that “Valdes he wouldn’t understand [until] he work[s] there.” The day after all of this,  Officer Lawanda Lawson replied taking offense, saying that she didn’t think they were racists, but it was still out of line.

“I can take a joke but that one was distasteful,” she said. “And even tho[ugh] it probably wasn’t meant that way, [be] careful[,] [yo]ur words can come back to bite [yo]u.” Bergnes’ response suggested he may not have taken her warning seriously.

“But the bank is ok right?”