How GOP Could Still Steal Nomination From Trump Even If He Wins 1,237 Delegates 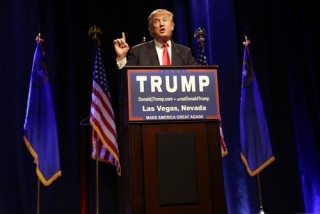 The 2016 Republican presidential primary has proven that anything is possible. Last year, no respected pundit worth their airtime would have predicted Donald Trump would be the front runner. After Tuesday’s win in Michigan and Mississippi, Trump now has 428 delegates and many say he is well on his way to securing the necessary 1,237 delegates to win the Republican nomination at the Republican National Convention in Cleveland, Ohio.

So, we wanted to know, even if Trump wins all the needed delegates, is there any possible way the GOP establishment could steal the nomination back from him? The answer is yes. It comes down to some intricacies on how the convention rules are set up, but these rules matter. It would certainly be unprecedented but given the rebuke of Donald Trump by the Republican establishment in recent days, anything is possible.

“There are many ways to undo a first ballot, even if you have the magic number assuming the Trump delegates are not really loyal. They may start out to be loyal and change their minds,” Elaine Kamarck, a senior fellow at the Brookings Institute told LawNewz.com. Karmack is also the author of “Primary Politics.”

First some background on how the convention process would NORMALLY work — again, this is in your typical election. Delegates are bound by either state party rules or law to vote for the candidate who they are assigned to based on the primary or caucus in that state. However, they are usually only bound in the first round of balloting.  After that, it varies by state, but delegates are eventually freed up to change their vote. For example in Massachusetts, Trump won 22 delegates.  Those delegates are bound to vote Trump in the first round of balloting only.  So you would think, if Trump wins 1,237 delegates or more, there would be one round of balloting and he would win the nomination. Trump is the Republican candidate.

So that’s how it normally works, but this isn’t a normal election. We’ve already heard some rumors of back room dealings going on by the GOP establishment. So here’s how Trump could still lose according to a variety of election law experts with whom we spoke. The delegates could vote to change the convention rules even BEFORE the first round of balloting takes place. That’s right, in the days leading up to the convention, the RNC Rules Committee could recommend rules changes to the Convention Rules Committee. That committee could tweak the recommendations but they they would ultimately have to send the new rules to the floor of the convention for a vote by the delegates. If the delegates vote to change the rules so as to ‘unbind’ themselves, then they could vote for whoever they wanted even in that first round.

“The delegates ultimately have the final say in the rules that will govern the convention. That may mean that they opt to unbind themselves, but a majority of them would have to agree to that,” Josh Putnam, an expert in this matter, and lecturer at the University of Georgia told LawNewz.com.

Now you might say — wait a minute — there are many states that require by law delegates to vote a certain way in the first round of balloting. For example, in Arizona, the law binds all 58 delegates to the winner of the March 22, 2016 primary election. How could the delegates just throw that all away at the convention? Well, because state law can basically be overruled by new national convention rules, according to most legal experts.

“Political parties operate like private clubs. This stuff isn’t law, it is a matter of state party and national rules and regulations,” Gregory Magarian, a elections law professor at Washington University at St. Louis told LawNewz.com. Simply put, the state rules/laws are not enforceable.

“Are the Arizona State troopers going to go to Cleveland and arrest people on the convention floor? I don’t think so,” Karmack said.

“What can you do to (the delegate) if he violates state law? It is doubtful any such action to stop it would be upheld. Even electors can stray under the electoral college, which is a crime under some state laws. No such prosecution would be upheld,” Kenneth Gross, a DC based elections law attorney at Skadden, Arps told LawNewz.com. So bottom line, it appears delegates can change the rules to favor another candidate even before the first round of balloting.

In fact, there was an attempt in 1980 by Sen. Ted Kennedy to unbind delegates during the Democratic National Convention. The move ultimately failed but the Democrats adopted a rule which required delegates to vote in all “good conscience.”

“They recognized a situation in which you abandon the candidate (you are assigned),” Karmack said.

Of course, if this happened, you can bet that Donald Trump would take legal action to stop it.  “It would be playing with fire if they take it away from him. You risk tearing the party apart if you take the nomination away from him in ways that are viewed as less then fair,” Putnam told LawNewz.com.  Reince Priebus, the Republican National Committee Chairman says the prospects of a brokered convention are “highly unlikely.” But again, nothing about this election is typical.

“The reason (the Republican primary) is so unusual is that people worry about Trump and his policies, they also worry that he doesn’t have the right temperament to be President,” Karmack said. She added that if there is a bombshell dropped about Trump  in the next few months (as Mitt Romney predicted), that could be enough to push delegates to change their minds — or spur members of the GOP to start lobbying to change the rules.