How The Election Is Actually Rigged 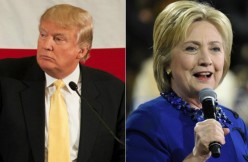 Donald Trump is sort of right. The election will be rigged, but not in the way he claimed. The system actually benefits him and Democratic opponent Hillary Clinton, and it’s the reason why people sneer at third-party candidates.

You all know about the Electoral College, correct? That outdated, convoluted way we choose the president? Basically, states choose “electors” to decide who’ll run the executive branch of our government. You get the idea, but if you want to see details, here’s the relevant text from the U.S. Constitution, Article II, Section 1. Note the text I highlighted in bold.

Each state shall appoint, in such manner as the Legislature thereof may direct, a number of electors, equal to the whole number of Senators and Representatives to which the State may be entitled in the Congress: but no Senator or Representative, or person holding an office of trust or profit under the United States, shall be appointed an elector.

The electors shall meet in their respective states, and vote by ballot for two persons, of whom one at least shall not be an inhabitant of the same state with themselves. And they shall make a list of all the persons voted for, and of the number of votes for each; which list they shall sign and certify, and transmit sealed to the seat of the government of the United States, directed to the President of the Senate. The President of the Senate shall, in the presence of the Senate and House of Representatives, open all the certificates, and the votes shall then be counted. The person having the greatest number of votes shall be the President, if such number be a majority of the whole number of electors appointed; and if there be more than one who have such majority, and have an equal number of votes, then the House of Representatives shall immediately choose by ballot one of them for President; and if no person have a majority, then from the five highest on the list the said House shall in like manner choose the President. But in choosing the President, the votes shall be taken by States, the representation from each state having one vote; A quorum for this purpose shall consist of a member or members from two thirds of the states, and a majority of all the states shall be necessary to a choice.

Did you finish reading that exhilarating block of 18th century text? Then you might have wondered, why isn’t the general public mentioned here? It’s because, ha, they aren’t. This goes against the Constitution’s current reputation, but it was originally an undemocratic text. As University of South Carolina Professor Woody Holton points out, Americans faced severe economic instability in the 1780s. Many drafters of our Constitution blamed this on the national government (made weak by the Articles of Confederation), and on state lawmakers chosen by popular vote.

Commentators don’t question the popular vote nowadays (unless they’re feeling pessimistic and bitter), but they did back then. It wasn’t really controversial to deny the vote to even working-class white men. When the colonies separated from the British, it sparked a decades-long process in which these guys got more political power than ever before. That transition wasn’t even half-way done in 1800. This change is what historian Gordon Wood likes to call “The Radicalism of the American Revolution.”

Our Constitution was designed to curtail this by limiting popular control of the federal government. For example, state lawmakers, not the general public, chose U.S. Senators. This process would continue until the 17th Amendment was ratified in 1913.

There has been no such amendment for the presidency. The 12th Amendment only established a separate voting process for the vice-presidency (before, the second-place finisher in the presidential contest became VP). The 22nd Amendment established term limits. Both were positive moves, but neither increased popular control of the executive branch.

Fortunately for democracy, states can boss around electors and therefore pass laws directing them how to choose: Electors must follow the results of the popular vote. Unfortunately, lawmakers implement this in the most self-serving way possible. Most states give all their electors to the candidate who wins the popular vote. Nevermind how close the actual results are. This just so happens to benefit the local dominant party. It’s why New York gives all its electoral college results to Democrats, and why Texas goes to Republicans. This makes no sense. People like Rep. Peter King (R-New York) aren’t an anomaly. There are conservatives in California, and liberals in Georgia. Too bad for them because their presidential vote is wasted unless they move to a swing state. Nebraska and Maine are the only places that divvy up electors, but it’s not like they adopted a common sense approach.

This leads to nonsense results like the 2000 election, where George W. Bush, who lost the popular vote, won anyway just because the electoral college skewed results in his favor. You probably remember that grouchy liberals blamed Green Party candidate Ralph Nader for Al Gore losing Florida and therefore the presidency. They’d say: He siphoned votes from the more viable candidate, and that’s why Bush became president. Third-party candidates were stigmatized more than ever before. It has continued to this day. Our winner-take-all system rigs things so they can’t be anything but “spoilers.”

Look, this isn’t a call for people to vote for Green Party candidate Jill Stein or Libertarian candidate Gary Johnson. Stein in particular has been getting blasted because she expressed doubt about whether doctors fully understood the possible dangers of vaccines, though she has denied being an anti-vaxxer herself:

As a medical doctor, there was a time where I looked very closely at those issues, and not all those issues were completely resolved. There were concerns among physicians about what the vaccination schedule meant, the toxic substances like mercury which used to be rampant in vaccines. There were real questions that needed to be addressed. I think some of them at least have been addressed. I don’t know if all of them have been addressed.

Trump and Clinton are easily the most controversial candidates in recent memory. Establishment Republicans might currently treat Bush like an embarrassing ex, but they still backed him in the contentious 2004 election. Trump doesn’t have that support. His public relationships with House Speaker Paul Ryan (R-Wisconsin) and Sen. John McCain (R-Arizona) are lukewarm at best. Sen. Ted Cruz (R-Texas) famously dumped on him at the Republican National Convention. Media outlets like Mediaite are riddled with reports of “#NeverTrump” conservatives. It’s one thing to attack the other side, but it’s another to be ambivalent about your own candidate.

And Clinton, oh man, Clinton. Recent poll numbers give her a clear advantage, but that probably has more to do with anti-Trump feeling than anything else. If you’ve spent time in our comment section, you know there are loads of conservatives who hate her like she’d keyed their cars. That feeling is shared by some liberals too. When Trump called her a “bigot,” he simply co-opted a line of criticism long pushed by skeptical left-wingers.

And you know, she really did flip-flop on same-sex marriage, and the Iraq War. She really did call certain teenagers “Super Predators.” And yeah, there’s the email scandal and recent allegations surrounding the Clinton Foundation‘s credibility.

What I mean to say is that she’s divisive. Even when we account for misogyny (that is definitely a thing, people), people would still be skeptical about her. After all, she is the establishment candidate. As a Yale Law School grad who served as a First Lady, Senator, and Secretary of State, she can’t be seen as anything but.

But we’ll have plenty of Republicans who will support Trump just because they hate Clinton. And weary liberals will still vote for Clinton just to keep Trump away from the Oval Office.

This state of affairs is very, very sad. No one else is available, so we might as well go with the less terrible choice. This is the presidency, but we’re choosing it like a lame prom date. This is the inevitable result of both the electoral college, as well as the winner-take-all elections occurring nationwide.

So what do we do? It’s going sound like I’m high, but bear with me here: We do what Australia does, and adopt a preferential voting system!

You don’t know what that is, do you? That’s okay. The Aussies use it for their House of Representatives. Theirs might be a parliamentary system, but we can easily adapt for our purposes. The best thing about this alternative is that it’s intuitive. Just vote for candidates in order of preference. Your choices will never go to waste. The United States is way too big for us to consider only two viable candidates.

I suspect you want to understand how it’d work in detail. This would be a nationwide popular vote. We’d ditch the electoral college altogether. Results are tallied as whole, not on a state-by-state, or county-by-county basis. Logistics might be pain to sort out. That’s okay. It’ll be worth it.

Let’s say you’re a #NeverTrump conservative who will choose Clinton despite hating her. Maybe you prefer Johnson above anyone else. Your vote might go like this: 1) Johnson; 2) Clinton; 3) Stein; and 4) Trump. Let’s say the initial ballot results end with Trump getting over 50 percent of the vote. If so, that’s how the election ends. But what if nobody gets the majority? Officials will review everyone’s first-choices, and toss the last-place candidate. Any voter whose top choice was tossed will still matter. It’s just that now, their second choice will be counted. Let’s say Johnson gets last place. Your vote still counts because now your vote would be for Clinton.

This process—toss out the last-place candidate, then recount ballots accordingly—continues until someone gets the majority vote. A system like this can only do good. As social commentator and cartoonist Patrick Alexander has suggested, major parties will learn to take cues from the lesser. So let’s go back to our hypothetical case. Maybe Johnson won’t win. Clinton is more likely to. If she sees that many of her voters preferred Johnson, then maybe she’d start adopting some of his policies so she can increase her appeal.

I bet you that critics will hand wave it away. Blah, blah, blah, it’s too complicated. Well, dang, raise you hands if every four years you Google “What is the Electoral College?” We’ve already got a complicated system. Might as well use one that works.

I’m not praying at the altar of the ranked voting system. I’m not demanding a utopia. I just want something better than what we have.

Political self-interest will determine whether any reform gets passed. Republicans dominated Congress in 2000, so of course, they weren’t going to complain when Bush won. Democrats acted like they had short memories when they took back both houses in 2008, and Barack Obama became president. Sadly, we might need another election debacle before lawmakers get the nerve to change things.

1) Tweaked a passage above for increased clarity about the 12th and 22nd Amendments. The old version reads: “Constitutional changes for the executive branch only have to do with things like the VP, and term limits.” The new version goes: “The 12th Amendment only established a separate voting process for the vice-presidency (before, the second-place finisher in the presidential contest became VP). The 22nd Amendment established term limits. Both were positive moves, but neither increased popular control of the executive branch.”