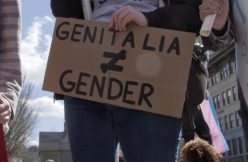 Transgender individuals in Indiana might not like a proposed law that’d make it almost impossible to change their sex on Indiana birth certificates. Rep. Bruce Borders (R-District 45) introduced HB 1361 to the state House of Representatives on Thursday.

If passed, SB 1361 will be enacted on July 1. According to Freedom Indiana, a civil rights organization, the state currently requires transgender people to obtain a court order if they want to change their sex on their birth certificate and other legal documents. The organization opposes this legislation in no uncertain terms.

“This discriminatory bill is completely unnecessary,” campaign manager Chris Paulsen wrote in a statement. If passed, HB 1361 would further harm Indiana’s already damaged reputation as an open and welcoming state.”

The group claims that HB 1361 also creates a searchable permanent record, that could be used to target transgender individuals for discrimination and harassment.”

This isn’t the first time state politicians wrangled over this subject. New Jersey lawmakers passed a bill that’d allow transgender people to change the sex on their birth certificate without getting surgery. Twice, actually. Gov. Chris Christie vetoed it both times. A trans woman recently sued in the aftermath.

[image via J. Bicking and Shutterstock]