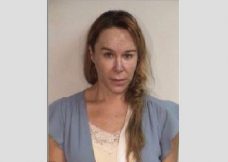 HONOLULU (AP) — A murder charge against a woman accused of deliberately driving off a cliff in Hawaii and killing her identical twin sister should be dismissed because prosecutors misled the grand jury that indicted her, a defense attorney said.

Authorities described the 2016 crash as a hair-pulling fight over the steering wheel. The sisters were seen arguing on the narrow, winding Hana Highway on the island of Maui before their SUV plunged 200 feet over a cliff.

Birney Bervar, Alexandria Duval’s defense attorney, filed a motion last week seeking to dismiss the charge, and a hearing is scheduled for Tuesday. A prosecutor says it will be up to a jury to decide on the evidence.

The defense motion says a witness to the crash did not testify before the grand jury, instead a detective took the stand to describe what that person saw. The witness had told police he saw the passenger pulling the driver’s hair with both hands and heard yelling.

The detective testified incorrectly that the witness said the passenger was no longer pulling the driver’s hair when they went over the edge, the defense said. The witness, who the defense interviewed, said the fighting and hair-pulling continued until he lost sight of the SUV as it drove past him and off the cliff, according to the motion.

Autopsy results showed that “long, loose blond hairs” were found on both of Anastasia Duval’s hands, the motion said.

The defense attorney also said an officer provided inaccurate testimony that data from the SUV showed Alexandria Duval didn’t brake before the crash.

An accident reconstruction expert hired by the defense said data from the air-bag control module showed she “most probably did not push and hold the throttle to the floor and make a hard left towards the wall as stated in the grand jury testimony,” according to the motion. “It is probable that having the drivers’ head pulled firmly to the right from the pulling of her hair could have caused some erratic driving.”

Deputy Prosecuting Attorney Emlyn Higa said in response to the motion that the hair-pulling had no effect on Alexandria Duval’s ability to drive the SUV safely and didn’t contribute to going over the cliff. The conflict between the experts for the prosecution and defense is what a jury trial is meant to resolve, Higa said.

“This case is clearly a tragic accident,” said Bervar, the defense attorney. “My client is devastated by the loss of her sister. It’s not intentional murder by any means.”

The sisters, born Alison and Ann Dadow in the Utica, New York, area, operated popular yoga studios in Florida before they changed their names. They moved to Hawaii in 2015 from Utah.