With Hours Left, Last Minute Plea to Get President Obama to Pardon Clinton 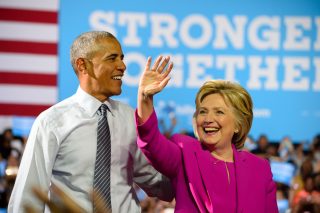 With less than 24 hours until President-elect Donald Trump becomes our 45th president, there is a last-minute plea to get President Barack Obama to pardon the former Democratic nominee in case the Trump administration goes after her for her actions as Secretary of State when she maintained a private email server. Obama has pardoned or commuted the sentences of more than 1,000 people, the most in history. Just this week, he announced that he was commuting the 35-year sentence of Chelsea Manning.  However, the chances of Obama pardoning Clinton are slim. In fact, he’s given no indication that he is even considering the matter. Despite that, there are still quite a few people asking.

“There is no question that the Constitution’s broad pardon power permits you to pardon someone who has not been convicted, or even charged, with a crime,” Robert Begleiter, a attorney at Constantine Cannon LLP and former assistant U.S. attorney in the Eastern District of New York wrote in The New York Daily News this week, “Do any of us want to gamble on President Trump keeping his word if Secretary Clinton or her allies criticize his actions? I don’t.”

Trump has recently walked back his campaign rhetoric in which he said he had plans to “lock her up.” In an interview with CBS News’ Lesley Stahl in November, Trump backed off a bit saying he “didn’t want to hurt them,” (referring to the Clintons).

“It is certainly also understood that, despite Trump’s comments, either Clinton might be prosecuted based upon newly discovered evidence.  This new evidence could come from FBI investigators looking into her email problem, or into concerns related to the Clinton Foundation, etc,” said Professor John Banzhaf  from the George Washington School of Law.  Banzhaf is also urging a presidential pardon. On top of that,  a number of people have started Change.org pages urging the same

During an interview with German publication Der Spiegel, Obama said “I can’t pardon somebody who hasn’t gone before court and presented themselves, so that’s not something that I would comment on at this point.” In that interview, he was specifically asked about Edward Snowden, but, presumably, Obama’s thoughts would also apply to a potential Clinton pardon.

However as supporters note, someone who has not been convicted — or even charged with a crime — can be pardoned. In 1974, President Ford pardoned Nixon for any crimes that he may have committed while he was president.

If Obama doesn’t save Hillary Clinton with pardon, it’s going to be a fun 4-8 years (8 if it’s Biden/Warren) with Trump admin finding INTENT

“But, some might ask, wouldn’t acceptance of the pardon be an admission of guilt? In an opinion whose 101st anniversary is next Wednesday, the Supreme Court stated just that, but gave no compelling explanation of why that is so. An offhand remark a century ago, which did not affect the outcome of the case, should be given little weight,” Begleiter wrote.

In July, FBI Director James Comey held a press conference in which he said there was not enough evidence to move forward with a case against the former Secretary of State.