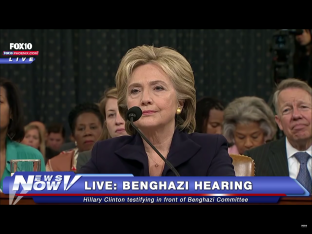 FBI Director James Comey during his testimony last week indicated that several statements Hillary Clinton made in her testimony before the House Select Committee on Benghazi were contradicted by findings in the FBI’s investigation.  However, he stated the FBI did not consider her congressional testimony as part of its investigation because they did not have a referral from Congress.  On Monday, Congressmen Jason Chaffetz and Bob Goodlatte sent a referral letter to the United States Attorney for the District of Columbia requesting an investigation into whether Clinton lied to Congress.  That’s a crime.

As you’ll see, and quite unfortunately for those wishing to see Clinton prosecuted, the law places a high burden on prosecutors to charge someone with perjury and/or lying to Congress.  Additionally, prior history shows that the Department of Justice very rarely prosecutes individuals for lying to Congress.  Therefore, even though Clinton probably lied to Congress, it is unlikely that she will be charged for perjury.

First, there are generally two statutes that come into play in prosecutions related to lying to Congress:  18 U.S.C. §1621 — perjury and 18 U.S.C. §1001 — false representations before Congress.

Under section 1621, the government must prove that a witness took an oath, before a competent tribunal, and “willfully and contrary to such oath states or subscribes any material matter which he does not believe to be true.”  The most difficult element to prove is that the witness “willfully” or knowingly made a false statement beyond a reasonable doubt. However, the government can also prove this element through circumstantial evidence.

The requirements for prosecution under section 1001 are described in 2007 Quinnipiac University law review article as follows:

The government must prove that the defendant: (1) knowingly and willfully made or concealed a (2) materially (3) false, fictitious, or fraudulent statement or representation within (4) the jurisdiction of the executive, legislative, or judicial branch of the federal government.

Based solely on the statutes and not any political influence, the decision to prosecute Hillary Clinton will come down to a question of her intent and belief at the time she testified before Congress.  Most reports indicate that Congress’ referral is focused on at least three of Clinton’s statements:  (1) that she did not have any classified material on her server; (2) her claim that there was only one server; and (3) her claim lawyers went through every email in full to determine what was work related.

The actual questions asked by congressional committee members along with Clinton’s exact responses will be key to making any determination whether to bring charges in this matter.  However, without getting into the full transcript of the relevant exchanges, one can probably still assume that the Department of Justice is unlikely to bring charges based on Clinton’s responses to questions about classified material.  Although there is much disagreement about his conclusions, Director Comey made it clear during his testimony last week that the FBI did not believe Clinton had the sophistication to understand the classification system.  This determination was made based on the FBI’s interview with Clinton on July 2.  Accordingly, if the DOJ and FBI determined Clinton did not understand the classification system on July 2, it stands to reason that they will also conclude that she lacked the sophistication to understand the classification system back in October of 2015.  Therefore, it would be difficult to see how the DOJ could conclude Clinton knowingly or willfully lied in her responses to Congress with respect to the classification matters.

The next issue is a bit more troubling for Clinton, although Director Comey arguably gave her an out on this matter too. During her testimony before the Benghazi Select Committee in October 2015, Congressman Jim Jordan asked Clinton if she used multiple servers.

CLINTON: …that was already being used by my husband’s team. An existing system in our home that I used, and then later, again, my husband’s office decided that they wanted to change their arrangements, and that’s when they contracted with the company in Colorado.

JORDAN: And so there’s only one server? Is that what you’re telling me? And it’s the one server that the FBI has?

CLINTON: The FBI has the server that was used during the tenure of my State Department service.

Director Comey’s statement on the morning he announced that he would not bring charges, as well as his congressional testimony made it clear that this statement was not true.  In his statement Comey said, “I have so far used the singular term, ‘e-mail server,’ in describing the referral that began our investigation. It turns out to have been more complicated than that. Secretary Clinton used several different servers and administrators of those servers during her four years at the State Department….”

However, Director Comey also testified about Clinton’s lack of technical sophistication in understanding email technology.  Thus, it is arguable that Clinton may not have understood that multiple servers were used during her time at the State Department.  It is a little less clear as to whether her response constitutes a reckless disregard for the truth, but the DOJ will likely give her the benefit of the doubt in this circumstance.

The final matter is far more troubling for Clinton.  Again, during questioning from Congressman Jordan, Clinton was asked about the process used to determine which emails were work-related.  Here is a relevant portion of that exchange:

JORDAN: But I’m asking how — I’m asking how it was done. Was — did someone physically look at the 62,000 e-mails, or did you use search terms, date parameters? I want to know the specifics.

CLINTON: [My attorneys] did all of that, and I did not look over their shoulders, because I thought it would be appropriate for them to conduct that search, and they did.

JORDAN: Will you provide this committee — or can you answer today, what were the search terms?

CLINTON: The search terms were everything you could imagine that might be related to anything, but they also went through every single e-mail.

This statement was not true, as Director Comey explained in his statement on July 5. “The lawyers doing the sorting for Secretary Clinton in 2014 did not individually read the content of all of her e-mails, as we did for those available to us; instead, they relied on header information and used search terms to try to find all work-related e-mails…,” Comey said.  At the hearing last week, Comey reaffirmed this finding in response to questioning from Congressman Trey Gowdy, stating that her lawyers did not read every email.

But here’s the reality: Prosecutors rarely go after individuals for lying to Congress.  A Quinnipiac law review article mentioned earlier found only six people have been successfully convicted of lying to Congress between the 1940s and the mid-2000s.

A recent example involving James Clapper, the Director of National Intelligence (DNI), comes to mind.  In 2013, DNI Clapper testified that the government does not “wittingly” collect information about millions of Americans.  Documents leaked by Edward Snowden appear to directly contradict DNI Clapper’s assertion, but he was never investigated and still hold his position of the nation’s top spy.

As the law review article also suggests, prosecutors and some lawmakers have come to accept that witnesses will lie when testifying before Congress.  This acceptance leads to a lack of prosecutions, despite what appears to clear violations of the relevant statutes.  And we have all recently seen how past reluctance to apply a specific statue can be used as justification for not charging Hillary Clinton with a crime.