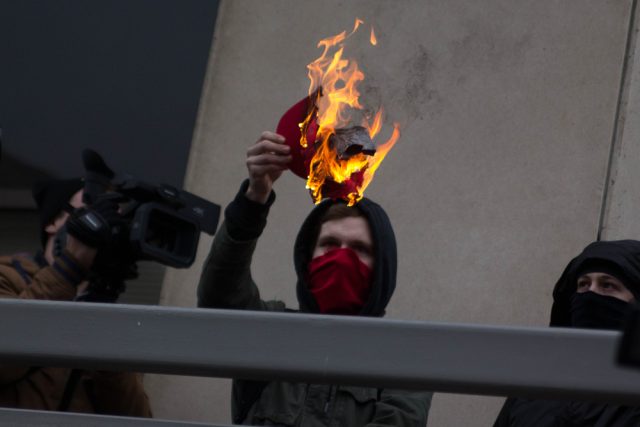 A White House petition calling for the anti-facist movement, termed “Antifa,” to be called a terrorist organization has already garnered 151,000 signatures. According to the White House website, if a petition obtains more than 100,000 signatures in 30 days, officials are required to respond. This latest petition was posted shortly after the Charlottesville rally in August.

The petition claims “AntiFa has earned this title due to its violent actions in multiple cities and their influence in the killings of multiple police officers throughout the United States. It is time for the pentagon to be consistent in its actions – and just as they rightfully declared ISIS a terror group, they must declare AntiFa a terror group – on the grounds of principle, integrity, morality, and safety.”

“AntiFa” is a generic term used to cover multiple groups that organize on the internet and take a “militant approach against facism and white nationalism that doesn’t necessarily shy away from violence.”

There are no known leaders or official spokespeople that we could find. Antifa protesters gained notoriety after participating in the 2017 Berkeley protests that broke out after conservatives, Ann Coulter, and Milo Yiannopoulos, were scheduled to speak.

New Jersey’s Department of Homeland Security lists Antifa as a far-left “anarchist extremist” organization. The White House has not responded to a request for comment yet about this petition.

The petition on the White House website that garnered the most signatures asks for Donald Trump to “immediately release his full tax return, with all information needed to verify emoluments clause compliance.” More than 1 million people have signed on to that one.