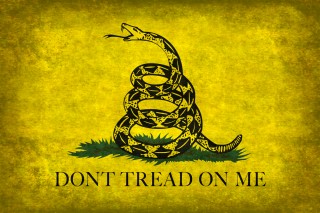 The Equal Employment Opportunity Commission is deciding whether a popular Tea Party symbol bearing a coiled snake and the phrase “Don’t tread on me” constitutes racial harassment if worn in the the workplace. The Washington Post’s “Volokh Conspiracy” blog, in a post by law professor Eugene Volokh, reported that the EEOC heard a complaint on the issue, and ruled two months ago that the matter required further consideration.

The complainant, using the alias Sheldon D., alleges that a coworker wore a hat bearing the symbol to work. When Sheldon complained to management, he was told the coworker would be ordered to stop wearing the hat, but he continued to do so.

The symbol, known as the Gadsden flag, was created by Christpoher Gadsden during the Revolutionary War. The complaint claims that Sheldon’s coworker’s hat was offensive because Gadsden was a “slave trader & owner of slaves.” Sheldon also said that the flag is a “historical indicator of white resentment against blacks stemming largely from the Tea Party.”

The EEOC said that the flag “originated in the Revolutionary War in a non-racial context,” but did take into account that there have been times when it has been involved in racial tension. The Commission cited a 2014 incident when attackers with ties to white supremacist organizations draped a flag over two murdered police officers, and when black firefighters complained about the flag being in the workplace, because they felt it was racially insensitive.

Given that the flag has been viewed in a racial context in the past, the EEOC held that Sheldon’s situation must be further explored. The Commission said that “[his] claim must be investigated to determine the specific context in which [the coworker] displayed the symbol in the workplace.” They hope that they can determine the meaning that the coworker meant to convey before issuing a final ruling.