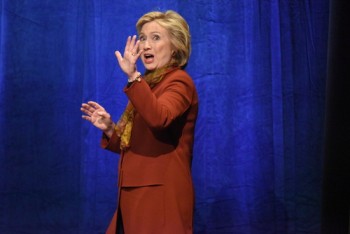 Judicial Watch, a conservative legal advocacy group, filed a plan on Tuesday for “narrowly tailored discovery” in its lawsuit that seeks to determine whether Hillary Clinton’s private e-mail system thwarted open records laws.  The discovery plan seeks to depose (question under oath) eight current and former State Department officials — including some who are currently working on Clinton’s election campaign — and leaves open the possibility of later seeking permission from the court to question Clinton herself.

According to a press release, Judical Watch seeks to depose notable Clinton aides including Cheryl D. Mills, Clinton’s State Dept. Chief of Staff; Huma Abedin, senior advisor to Clinton and vice chairwoman of Clinton’s election campaign; Bryan Pagliano, an IT specialist who set up clintonemail.com system and was recently granted immunity by federal investigators; and Patrick F. Kennedy, State Dept. Undersecretary for Management.  Additionally, the plan seeks approval of written questions to be answered under oath and testimony from witnesses that can provide testimony on behalf of the State Dept. on a handful issues related to Clinton’s use of a private e-mail server.

Last month, U.S. District Court Judge Emmet G. Sullivan granted Judical Watch’s request to conduct discovery into whether the State Department and Clinton deliberately thwarted the Freedom of Information Act (FOIA) during her time as secretary of state.  The Judicial Watch plan requests that all depositions take place within an eight-week window.  Attorneys for Clinton, her aides and the State Dept. are expected to file objections and/or request modifications to the proposed plan and Judge Sullivan is expected to issue his final ruling on April 15.

According to the Washington Post, when asked about the issue Clinton campaign spokesman Brian Fallon replied, “This is the same right-wing organization that has been repeatedly attacking the Clintons without success since the 1990s, and they are clearly going to pull out all the stops to try to hurt the secretary’s presidential campaign.”