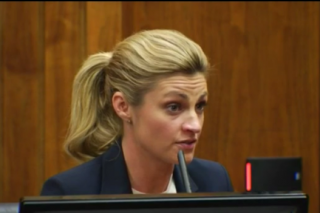 Since Monday morning, the jury has been deliberating on whether the Nashville Marriott, its operators, and a convicted stalker should pay Fox reporter Erin Andrews in her $75 million lawsuit. Jurors heard seven days of testimony, and lawyers delivered their closing arguments on Friday, and they are announcing their verdict at this very moment.

The case stems from a 2008 incident which occurred at the Marriott at Vanderbilt University, in which a man secretly videotaped Andrews changing in her hotel room. He then proceeded to post the naked video on the internet. Michael Barrett was later convicted and served 2 1/2 years for stalking.  In addition to the suspect, Andrews made a claim against the hotel, saying that they negligently gave Barrett her room number and let him stay in the room next door.

WATCH LIVE in the video below via WKRN: