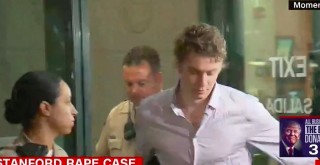 At around 9:09 a.m Friday morning, former Stanford University student athlete, Brock Turner was released from jail. The jail was surrounded by cameras as Turner made his way out of the building and into a white SUV. He is heading back to Ohio to serve out his probation, which was part of the deal he worked out with prosecutors. He will have to register as a sex offender within three days.

Turner was being held at Santa Clara County jail on a six month sentence after he was convicted in June of sexual assaulting an unconscious woman. Turner was released after only three months (half the sentence) due to good behavior.

The case rose to prominence because of the powerful victim impact statement that was read aloud in court and reported on by Buzzfeed. Many people saw Judge Aaron Persky as being far too lenient in his sentence. Some advocacy groups have subsequently reviewed Persky’s record in sexual assault cases and have called for him to be recalled.

In light of the controversy surrounding this case, Judge Perskey announced earlier this month that he would stop hearing criminal matters.