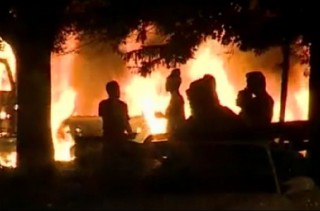 Violence engulfed the streets of Milwaukee Saturday, after police shot and killed a man who authorities say was armed at the time, CNN reported. Protesters threw rocks at officers, and local businesses were burned during demonstrations that began in the afternoon and went until early Sunday morning. At least one officer was injured during the chaos, with at least three protesters being arrested.

Crowd breaks widows of unoccupied squad near Sherman and Auer. Other squad set afire and broken windows on another. pic.twitter.com/Jux2mJZYyQ

Gas station at Sherman and Burleigh set on fire. MFD cannot extinguish fire as gunshots are being fired.

According to Mayor Tom Barrett, protesters used social media to draw more people out to join them. Barrett called for an end to the violence, saying “If you love your son, if you love your daughter, text them, call them, pull them by the ears and get them home. Get them home right now before more damage is done.”

Police reported that they were restoring order early Sunday.

MPD is restoring order to the area of Sherman and Burleigh and reducing deployments.

“I never thought I would see my own city in a state of unrest and a potential riot,” a Milwaukee woman told WDJT.

City Alderman Khalif Rainey told CNN that the city has been dealing with racial tension, saying that the violence that broke out on Saturday was the result of unemployment, poor education, and injustice. “This community of Milwaukee, Wisconsin, has become the worst place to live for African Americans in the entire country,” Rainey said. “Something has to be done to address these issues.”

The chaos started after the police shooting claimed the life of a 23-year-old man. Authorities said that two officers stopped two individuals who were driving, resulting in a foot chase when they exited their car. One of the officers shot one of the men, who was holding a handgun at the time. Police say the man’s weapon was stolen during a burglary. Mayor Barrett said at a press conference that the officer “ordered that individual to drop his gun, the individual did not drop his gun,” so he then fired several times.  Police said the man was hit once in the arm, and once in the chest. The Wisconsin Department of Justice will investigate the situation. The officer was wearing a body camera at the time, so the video is expected to be made available for the investigation. The officer has been placed on administrative duty while the investigation takes place.

Update: ABC News reported that according to Mayor Barrett, bodycamera footage confirmed that the man shot by police was armed.