VIDEO: What It Was Really Like When O.J. Simpson Tried On The Gloves 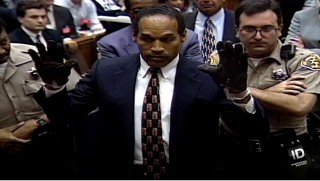 During Tuesday night’s episode of The People v. O.J. Simpson, viewers will see a recreated scene of what might be the most pivotal moment in the entire murder trial — when O.J. Simpson’s tried on those infamous gloves. The famous phrase ‘if it doesn’t fit, you must acquit,’ came after Simpson’s attorney Johnnie Cochran reflected on the evidence. Since the case is now back in the national spotlight, we thought now was a good time to tell you about what that moment was like in real-life and why it became such a turning point in the case.

During the 1994 police investigation, one of the cashmere-lined gloves was found at the scene where Nicole Brown Simpson and Ron Goldman were brutally murdered. Los Angeles Police Detective Mark Furman said he found the second glove behind Simpson’s guest house. DNA tests showed blood found on the glove discovered near Simpson’s property contained genetic markers of Simpson and both victims, according to reports at the time. The prosecution also presented evidence that Nicole Brown had bought gloves just like these for Simpson.

In the midst of the trial, on Wednesday June 21, 1995, at the prosecution’s request, Simpson left the defense table. As, the jurors watched on, he visibly and very dramatically struggled to get them over his knuckles. The judge instructed him to come towards the jury as he struggled. The entire courtroom was stunned.  O.J. held up his hands triumphantly so the jurors could see very clearly — the gloves didn’t fit.

“No one could believe that they (prosecutors) were actually going to do it since it was such an enormous risk. So, we assumed if they were moving forward with it they must know that it’s going to fit,” said LawNewz.com’s founder Dan Abrams. Abrams was a reporter for Court TV at the time, and covered the entire trial. “Sitting inside the courtroom it was hard to see exactly how it fit or didn’t, but the exasperation on the face of (prosecutor) Chris Darden told us everything we needed to know. Disaster.”

Former Associated Press reporter Linda Deutsch who also sat in the courtroom, said in a recent article on NBC Los Angeles’s website that she was so stunned that she called up Darden right away. She recounted the following, very telling conversation:

Darden: Well, I looked at his hands and I looked at the gloves and I thought they would fit.

The decision to let Simpson try on the gloves was clearly a big misstep by the prosecution, and may have derailed the case.”It was like it was happening in slow motion. You could tell it was going to be a disaster for the prosecution,” Jeffrey Toobin told LawNewz.com. Toobin authored the book, The Run of His Life: The People v. O.J. Simpson, for which the series is based on.

“It was just an elementary mistake — allowing the defendant to control a demonstration like that. It was also very striking to see O.J. stand up in front of the jury for the first time in the case. And he milked the moment for all it was worth,” Toobin said.

At the time, the prosecution insisted that the gloves didn’t fit Simpson during the courtroom demonstration because the gloves shrunk from being soaked in blood and because Simpson had rubber gloves on underneath.  Lead prosecutor Marcia Clark later placed the blame for the demonstration’s flop on her co-prosecutor Chris Darden.

“I did not want [Simpson] to try on the evidence gloves. I never did,” Clark told Dateline NBC in a special.   “That was [Darden’s] call. … I was miserable from the moment that Chris said, ‘No, I’m doing this.’ And I never expected anything good to come of it.”

“And I said, ‘It’s okay. If that lost the case for us, we were never going to win anyway,” she said in the interview.