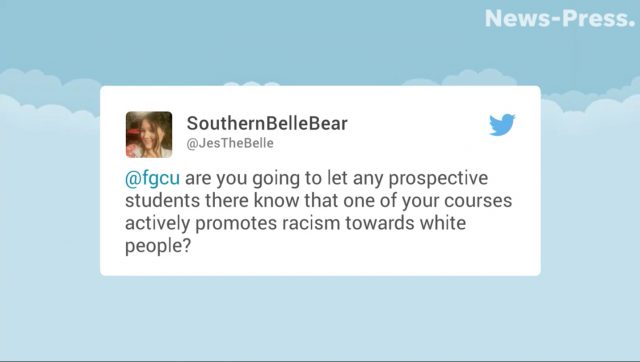 Response to the class has proved somewhat critical around Fort Myers, Florida. So critical, in fact, that campus police officers will also be attending classroom discussions.

Sophomore Sabrina Lathura told the local NBC affiliate that the presence of cops in the class was news to her. She said: “The thing about the police officers is pretty surprising; I didn’t even know that.”

Senior Shaun Tomlinson as a bit more sanguine about the news. He said: “You put two words together that a lot of white people don’t like – white and racism. That’s going to obviously bring some attention.”

Word of the course certainly has resulted in such attention–and, as if to prove the course’s and its defenders’ points, quite a bit of that attention has been hateful and negative.

Professor Ted Thornhill, who is teaching the class, told the Naples Daily News that since the class was announced he’s received numerous threatening emails and voicemails–many of them explicitly racially bigoted. For his part, however, Thornhill was uneasy about being cast in any sort of martyr’s role because of the course. He said:

The number of emails I got pales in comparison to the thousands and thousands of comments and post on all manner of social media and traditional media outlet websites that said things that were unspeakable.

Thornhill also kept mum about how long the police presence would last. He noted, “I don’t think that we would share many of those details for individuals who have negative intentions. I think that we will be safe and that students don’t have anything to worry about except for completing their reading and doing their work and engaging with the material.”

Florida Gulf Coast University spokesperson and Chief of Staff Susan Evans issued an emailed statement regarding the police presence and potential for violence. It reads, “We have prepared for any possible distractions related to Tuesday’s first class of the White Racism course, but we are expecting normal campus civility as our students engage in this and other courses at the spring semester’s start.”

The course description is reproduced in full below:

Course description
In this course, we will interrogate the concept of race; examine the racist ideologies, laws, policies, and practices that have operated for hundreds of years to maintain white racial domination over those racialized as non-white; and discuss ways to challenge and disrupt white racism and dethrone white supremacy in the service of engendering an anti-racist society where whiteness is not tied to greater life chances.