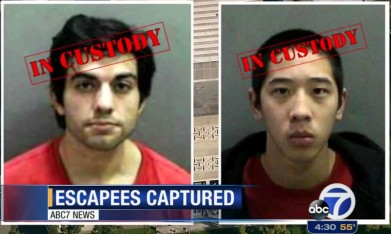 The two remaining California jail escapees were caught — after a observant man noticed a van matching the one they had allegedly stolen– sitting in a Whole Foods parking lot near San Francisco, California.

The man flagged a nearby police officer down who was attending to an unrelated medical emergency, according to the Los Angeles Times. Officers chased Hossein Nayeri and arrested him after a short pursuit. They found his fellow escapee, Jonathan Tieu, hiding inside the van. Police say they recovered bullets inside the van. The arrests happened more than one week after the three inmates made a daring escape from the Orange County jail.

The third escapee Bac Duong turned himself in to authorities on Friday. This ends a massive manhunt that spanned several counties.

It is unclear how much, if any, of the $200,000 reward will be paid out now that all three escapees are back in custody.  Authorities stated they expect it will take several days to sort out, as various circumstances must be taken into account given how all three were captured .