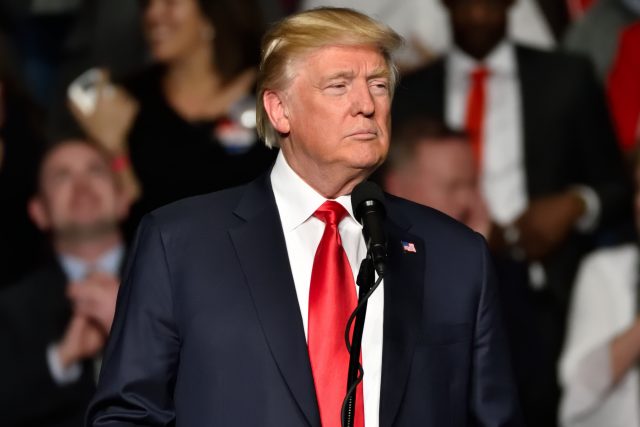 It’s Day 17, and those Americans who aren’t consumed with boycotting Budweiser, Audi, and 84 Lumber for spreading inspiring messages are asking, “are we there yet?” with respect to throwing out President 45 and moving on to someone with a modicum of respect for the Constitution. Impeachment seems a major potential, and the only question is whether we’ll have to wait until the midterm elections to see it happen. Okay, well not the only question. There is also the related inquiry as to whether Republican members of Congress will [continue to] make willful blindness their go-to method of governing, or if a few of them will develop some desperately-needed integrity. Here’s hoping on that one.

Through the campaign and President Trump’s earliest days in office, there was considerable discussion of impeachment, particularly as it related to Trump’s probable violations of the Emoluments Clause.   But no matter how egregious Trump’s misbehavior, there has always been a corresponding argument against impeachment. Trump may have defrauded thousands with Trump University, but that fraud happened prior to his election, making the timing wrong for impeachment. Trump may have sexually assaulted scores of women, but those assaults wouldn’t constitute the kind of “high crimes and misdemeanors” required for impeachment and also happened before he was elected. Trump may be using his power as POTUS to line his own pockets, but those conflicts may have been ratified by the election itself. Bottom line, even though Trump’s nearly every breath seems to register somewhere on the scale from “shady” to downright “sinister,” impeachment is a complex legal-political hybrid for which there isn’t a lot of precedent and there is a whole lot of grey area.

But there’s a good chance that’s all about to change.

President Trump may be about to hand us an airtight case for impeachment and conviction. And if he misses the mark on his first try, he still has several chances to beat out Johnson, Nixon, and Clinton as the only American president ever to be convicted on an impeachment. How’s it going to happen? Well, if Twitter is any indication, our Commander in Chief is at least considering defying a federal court order and simply doing as he pleases.

At issue is the January 27, 2017 Executive Order (“EO”) directing federal agencies to begin the “extreme vetting” of refugees. Immediately after its issue, all hell broke loose. Emergency petitions were filed in courts across the country, and Customs and Border Patrol (“CBP”) officers were faced with implementing procedures for which they were totally unprepared. Dulles Airport became one such pit of confusion, after a Virginia judge ordered CBP to provide travelers affected by the EO with lawyers. Instead of simply providing travelers access to the dozens of volunteer immigration lawyers who were waiting at the airport to help them, CBP (allegedly under the direction of the Department of Homeland Security) provided telephone numbers to legal services groups to the needy travelers. And if that’s not bad enough, there appears to be some evidence that those involved purposely attempted to hide their actions with secret phone calls and conspicuously-absent documentation.

This failure to comply with the Virginia judge’s order could well be, as renowned Constitutional Law Professor at Harvard Law School, Laurence Tribe, has described it,“A deliberate and knowing failure by the President to comply with a facially lawful court order.”

The State of Virginia is trying to to hold individuals (and perhaps even Trump himself) in contempt for their part in circumventing the court order — which could absolutely be the basis for impeachment.

But wait, there’s more. The President is also setting the stage for blatantly disobeying some court orders out West.  This past weekend, Seattle Federal District Judge James Robart issued a temporary restraining order which halted any enforcement of President Trump’s EO. The Department of Justice wasted no time appealing that TRO to the 9th Circuit; the appellate court declined to change Judge Robart’s order and instead, directed both sides to file briefs today before it rules on the matter. There’s nothing unusual about an executive order giving rise to litigation; even if a court (or every court) rules against the Trump Administration on the issue of this executive order, that alone wouldn’t indicate any wrongdoing on the part of President Trump. In fact, the New York Times ran a piece today, reminding readers that Neil Gorsuch—Trump’s recent nominee for Supreme Court—said exactly that:

“To this day, one of the surest proofs any nation enjoys an independent judiciary must be that the government can and does lose in litigation before its ‘own’ courts like anyone else.”

The problem (at least with regard to impeachment) isn’t that Trump may lose this legal battle; the problem is that he may proceed to do as he pleases even if he does lose. Again, Trump hasn’t openly said that he will instruct officials to do this, but, based on what apparently happened in Virginia, I wouldn’t put it past him. If Trump were to take any measures whatsoever to continue enforcing his Executive Order – either now, before the 9th Circuit rules, or later, in the event the 9th Circuit rules against the administration – nothing could be a clearer precursor to impeachment and conviction.

Immediately after Judge Robart’s order, our president tweeted the following:

It hardly takes a forensic psychologist to see that Trump is setting us up for questioning Judge Robart’s authority. Whether that questioning amounts to anything more than the typical orange bluster remains to be seen. But whether Trump believes it or not, Judge Robart is a federal judge and does have the authority to issue orders. Like anyone else, Trump’s failure to obey those orders would be illegal and grounds for contempt. And could very easily fall under the “high crimes and misdemeanors” clause in the Constitution which is needed to impeach a president.  While Trump may have conned quite a large portion of America into believing that popularity trumps legality when it comes to policy, I’m guessing that most of Congress knows it doesn’t quite work that way.  Whether or not a majority (real or imagined, in Trump’s case) of Americans believe the president should violate a direct court order, doing so would be patently illegal.

In the end, we may find that Trump’s signature small-worded straight-talk may be what sinks him. Should it become clear that Trump’s actions directly defied a court order (either in Virginia, Seattle, Brooklyn, the 9th Circuit, or anywhere else) there will be no question about his intent. Trump has been more than clear in his outrage over losing in court:

Just cannot believe a judge would put our country in such peril. If something happens blame him and court system. People pouring in. Bad!

Right now, the DOJ is furiously drafting briefs and Trump is likely dreaming up the next zinger to throw onto Twitter.  As we wait for the administration’s next move, we can do so with equal parts dread and hope.  Dread, for the effect it may have on our fellow human beings in need, but hope for it to mark the beginning of what can only be a yuge downfall.