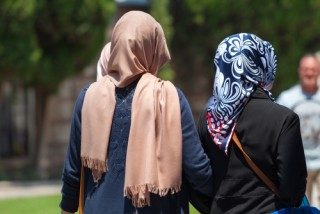 The lawsuit alleges that Trump’s order not only bars new Muslims from entering the United States, but its “equally central purpose . . . is to initiate the mass expulsion of immigrant and nonimmigrant Muslims lawfully residing in the United States” by stopping them from returning home to the United States after overseas travel.

The Council on American‐Islamic Relations, the nation’s largest Muslim civil rights and advocacy organization, filed the lawsuit in federal court in the Eastern District of Virginia (Alexandria) on behalf of 27 plaintiffs, including Muslim-American community leaders and unnamed Doe individuals, listed as “John Does.”

Among the plaintiffs are Rashida Tlaib of Michigan, the first Muslim‐American woman to serve in the Michigan Legislature and the second Muslim woman in history to be elected to any state legislature in America.

Other plaintiffs include students with visas, lawful permanent residents, refugees and others who allege Trump’s order prevents them from traveling abroad and returning home and will deny them U.S. citizenship when they seek it.

Trump’s order represents a “vulgar animosity” toward one religion over others, and has the “apparent and true purpose and underlying motive” of banning Muslims from seven Muslim‐majority countries (Iraq, Iran, Libya, Somalia, Sudan, Syria and Yemen), the lawsuit alleges.

The lawsuit claims that the religious “malice” of the immigration ban was revealed on December 7, 2015, when President Trump issued a campaign promise to institute “a total and complete shutdown of Muslims entering the United States until our country’s representatives can figure out what is going on.”

Trump’s “Muslim Exclusion Order” implements “an impermissible religious gerrymander that divides foreign nationals, even those lawfully present inside the United States, into favored and disfavored groups based on their faith,” the lawsuit alleges.

The complaint alleges that the executive order violates the First Amendment protections of the free exercise of religion and ban on the government establishment of religion, and the Fifth Amendment guarantee of equal protection of the laws.

Trump’s administration has said the order is legal, and only follows along with what other presidents have done in the past as it relates to limiting immigration into the United States.