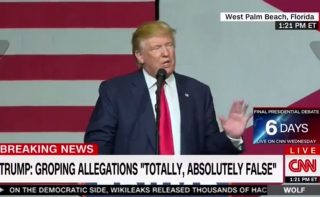 On Wednesday,  The New York Times published an article featuring accounts from two women who claim Donald Trump touched them inappropriately. Now, Trump is fighting back. But instead of simply denying the stories and leaving the rest to a judge, the Republican Presidential nominee and his surrogates and talking heads on T.V. have attacked his attackers.

At a campaign event on Thursday, Trump addressed the printed allegations, and went on the offensive, calling the stories “outright lies” and that the allegations were “nothing more than false smears.” He seemed to make a broad attack on their characters too, saying, “You take a look at these people, you study these people, and you’ll understand also.”

Trump spokeswoman Katrina Pierson also publicly said Leeds’ allegations in particular were not true. “I do not believe it at all, it is 100 percent patently false,” Pierson told CNN, also going so far as to call the story “ridiculous.” However, she didn’t attack Leeds’ character, she just said that her story, which involved Trump touching her on an airplane, was impossible given the types of planes commonly used in the 1980s.

But by doing this, is Team Trump opening themselves up to further problems? While the women involved never took legal action for the alleged groping, and many of them can’t because of the statute of limitation.  They could file complaints for defamation. This is similar tactic used in several cases where women accused Bill Cosby of defamation for how he responded to their allegations that he sexually abused them. And, in fact, high profile attorney Lisa Bloom, who represents Jill Harth,  hinted she might do just that. Harth accused Trump of sexually assaulting her in the 1990’s. Trump vehemently denied the allegations, and told LawNewz.com that Harth had some “real problems.”

To prove defamation (in print form it’s libel, if it’s spoken it’s slander), someone has to prove that a person made a statement to a third party that was false and that it damaged the subject by causing harm to their reputation. Now, when the subject is a public figure, there’s the added element of proving “actual malice,” which means that the person making the statement had to either know that the statement was false, or acted with reckless disregard for whether or not it was false. In certain cases, there is such a thing as a “limited public figure,” where an otherwise private individual is considered a public figure only for a certain issue, if they discuss an existing public controversy.

For the sake of argument, let’s go with the tougher standard and say that Harth, Leeds and Crooks are limited public figures. Trump called them liars, and accused them of intentionally smearing him. He also implied that each of them possessed some vague personal defect when he said if “you look at these people … you’ll understand.” The said this at a televised campaign event. That takes care of the third party requirement, because he essentially addressed the comments to every party imaginable. It certainly appears to be defamatory, since he’s attacking their credibility and character. The major question is whether Trump’s statements were false, and if he either knew they were false or acted with reckless disregard to whether they were true. Now, this whole controversy is centered on encounters between Trump himself and these women

So basically, if Trump’s telling the truth and he didn’t do these things, not only would he be safe, but he’d at least have a leg to stand on in his case against the Times (he still might not win, but he’d have a case). If Trump’s lying, that means Leeds and Crooks aren’t, and they could very well prevail if they took action against him.

Pierson’s statement was just as public as Trump’s. She insisted that Leeds’ story was false, but didn’t flat out call her a liar. It was implied, but not stated as fact, so it might not be quite as damaging. Pierson said this with an air of certainty, as is her job, and gave some background evidence about planes that was supposedly meant to prove her case, so if we applied the limited public figure standard, it could be difficult to prove defamation. If what Pierson said about Leeds was not true, it would be tougher to show that she knew it was false, and given her extensive research on 1980s aircrafts, it might be difficult to show a reckless disregard, unless Leeds could somehow show that Pierson had knowledge at the time that Trump did commit the alleged act. Or, you know, if she made up the plane stuff.

Now regarding Kasowitz, that’s a little bit trickier. His statement was only directed towards Baquet, but that still counts as a third party where he’s talking about Leeds and Crooks. Kasowitz called their allegations “false and malicious,” saying that they are liars who had ill intent. This in itself might not be considered harmful, because while the letter did get out to the public, Kasowitz only addressed it to Baquet, whose personal opinion in the matter would hardly affect the women’s reputations. However, Kasowitz’s letter demanded a retraction and public apology, and if Baquet complied and published a piece in the Times that said Leeds and Crooks’ stories were false, that would like be quite damaging to their reputations. But Kasowitz may not know whether their stories were false, and as Trump’s advocate, he was speaking on his client’s behalf. If Leeds and Crooks were to be considered limited public figures, his statement to the Times might be protected. If not, they might have a case.

Either way, something tells me this story is far from over.