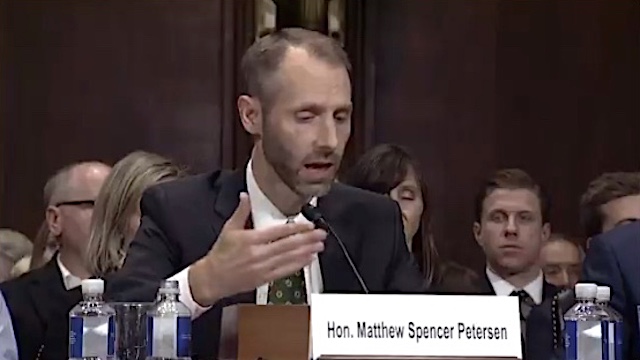 As perhaps you’ve seen, Republican Sen. John Kennedy of Louisiana reamed a panel of President Donald Trump’s judicial picks in a Senate Judiciary Committee hearing video which quickly went viral overnight. Nominee Matthew Spencer Petersen, who currently sits on the Federal Election Commission, struggled to answer what many would argue are simple legal questions during the hearing. If President Trump gets his way, Petersen will sit as a federal district judge in Washington, D.C., though even many loyal Republicans are questioning the fitness of several of President Trump’s picks.

Get ready!  Here are the answers to the more technical questions posed by Sen. Kennedy that nominee Petersen should have given. If you are considering a federal judgeship, please read this “cheat sheet” so that you’ll fare better during your hearing. If you’re not considering a federal judgeship, read it with the confidence that you will in just a few moments know more than a presidential nominee did during his hearing.

Question:  Can you tell me what the Daubert standard is?

Law&Crime Answer:  The so-called “Daubert Trilogy” is a series of U.S. Supreme Court cases from 1993, 1997, and 1999 which govern the admissibility of scientific evidence and, later, expert testimony in trials. In a nutshell, the cases held that judges are the gatekeepers of such evidence. The Daubert cases were designed to keep junk science or unreliable scientific methods out of trials. The key word is “reliability.” Judges use a series of factors to determine whether scientific evidence or expert testimony is reliable. Among the factors judges consider are (1) whether the technique has been empirically tested; (2) whether the technique has been subjected to peer review and publication; (3) does the technique have a known rate or error or other controls to prevent erroneous results; and (4) are the methods generally accepted in the scientific community.

The cases for those who want to geek out in the weeds are Daubert v. Merrell Dow Pharmaceuticals, General Electric v. Joiner, and Kumho Tire v. Carmichael.

And, look:  not knowing these cases is a really big deal. They’re among the most important evidence cases out there, and evidence law textbooks give them a lot of attention. Now that the Multistate Bar Exam tests evidence as one of its seven subjects, it’s safe to say more people at least should be able to answer basic questions about the cases.

Making A Murderer fans probably also know the even more loosey-goosey Walstad standard, which was at play during the Steven Avery murder trial in Wisconsin in 2007. That state standard focused only on relevance:  any test which could nudge a case one way or the other, either for or against the defendant, was allowed into court. That’s why prosecutors in the Avery case used a newly-developed test on a preservative called EDTA to try to convict Avery. I’ve long argued that had Wisconsin adopted the much more strict Daubert standard, or perhaps even the moderate Frye standard, the EDTA test would have probably never been admissible. The Avery case exemplifies why federal courts are afraid to let tests without clear indicators of reliability into court.

Question:  Do you know what a motion in limine is?

Law&Crime Answer:  Oh, come on! This is so easy! A motion in limine is a motion, almost always filed prior to trial, to sort out an evidence issue before the case gets to the jury. Attorneys file them to get evidence into the trial they want to have and to exclude evidence from the trial they don’t want to have. Note to trial-watchers:  we here at the Law&Crime Network love to get our hands on them, because then we can see what arguments led up to the trial we are actually watching. (And, often times, they provide salacious tidbits of what’s going on behind the scenes, even if the better angels of our nature remind us that it’s inadmissible.) In many trials, attorneys file more than one motion in limine, so they are often numbered “first motion in limine,” “second motion in limine,” etc.

Question:  Do you know the Younger Abstention Doctrine?

Law&Crime Answer:  This question surrounds whether federal courts can get in the middle of a pending state criminal case and a few other types of cases. The U.S. Supreme Court held in Younger v. Harris that federal courts cannot meddle with or shut down state criminal proceedings unless something really, really, really, really, really bad is going on (in legal terms, an “irreparable injury” which is “both great and immediate”). The 1971 Younger case sets up the general standard that a state criminal defendant must defend him or herself in state court before running to a federal court for help (which would happen, if, for instance, the defendant believes his or her constitutional rights were somehow violated). There are a few exceptions to the rule that federal courts won’t get in the middle of a state prosecution:  (1) if the prosecution is in “bad faith;” (2) if there is evidence of prosecution “harassment;” or (3) “any other unusual circumstance that would call for equitable relief.” If you want to read more about it, click here, as the doctrine continues to evolve.

Question:  How about the Pullman Abstention Doctrine?

Law&Crime Answer:  This doctrine surrounds whether federal courts should get in the middle of cases involving state laws before state courts have had their final say. The underlying 1941 case, Railroad Commission of Texas v. Pullman, was rife with racial discrimination claims. It questioned a Texas law governing Pullman conductors and porters. The U.S. Supreme Court said that the Texas high court, not the federal courts, was the final arbiter of Texas law, and that federal “constitutional adjudication plainly can be avoided if a definitive ruling on the state issue would terminate the controversy.” In other words, federal courts shouldn’t jump in the middle of state law claims unless and until the states have had a full chance to deal with things first. The U.S. Supreme Court kicked the case back to the local federal district court in Texas with instructions to “retain” it until state courts had their say, which the Supreme Court expected to be done with “reasonable promptness.”

But, wait! Wait!!! What about Burford Abstention and Colorado River Abstention?  Sorry, we won’t get into that today because Sen. Kennedy did not ask about it — this time around. Be forewarned, however, that maybe he’ll slide those abstention doctrines into the next Senate Judiciary Committee hearing. (Hint, hint?) C’mon, Senator Kennedy, I’m ready for those as well.