Trump Appears to Change Stance on ‘Opening Up’ Libel Laws 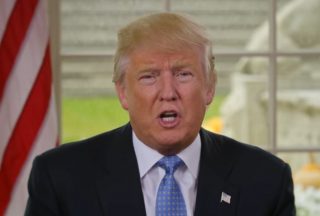 Donald Trump discussed a variety of issues during his meeting with the editorial staff of The New York Times on Tuesday. At one point, Trump’s attitude towards the First Amendment and freedom of the press came up. Trump had previously said he wanted to “open up” libel laws to make it easier to sue over disparaging statements about him. During Tuesday’s meeting, the President-elect admitted that he may not have thought it through at the time, according to the Times‘ Mike Grynbaum.

Open up the libel laws? Trump says someone told him, “You know, YOU might be sued a lot more.’ I said, You know, I hadn’t thought of that.”

Apparently, someone close to Trump made him realize that the laws apply to everyone, and that if the Times and other publications became more vulnerable to lawsuits, he himself would be at risk as well. Given Trump’s penchant for being, well, outspoken about others, that could create more problems for him than it would solve.

So given all of this, what will Trump’s approach to the First Amendment be when he’s in power?As Times correspondent Maggie Haberman reported, Trump said, “I think you’ll be happy.”

Trump gets asked about his commitment to first amendment, says, “I think you’ll be happy.”