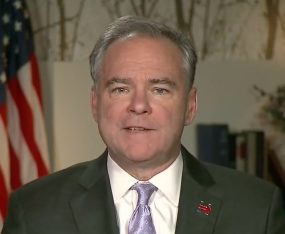 On Friday, Wikileaks released what it claims is the first batch of more than 50,000 emails they obtained from the account of Clinton campaign chairman John Podesta.  Among the more notable items contained in the release are purported excerpts from private speeches Hillary Clinton gave to Wall Street bankers after she left the State Department in 2013.  The Clinton campaign has been rather quiet about the newly leaked materials, refusing to address the apparent differences between some of Clinton’s public positions and what she says when the media and public are not listening.  During an appearance on CNN on Sunday morning, Democratic vice presidential candidate Tim Kaine seemed to follow the campaign line, refusing to answer any questions about the leaked materials.

According to the newly released Wikileaks materials, Clinton gave a speech in 2013 where she told a group from the Brazilian banking company Banco Itau about her “dream [of] a hemispheric common market, with open trade and open borders….”

Jake Tapper, host of State of the Union, asked Kaine about these remarks, specifically whether Clinton truly wanted open borders.

The vice presidential candidate dodged the question by seeming to imply that perhaps the documents were not legitimate.

“I don’t think we can dignify documents dumped by Wikileaks and just assume that they are all accurate and true,” Kaine said in response, before pivoting.

Tapper then jumped back in and asked Kaine to clarify whether he was “disputing the accuracy” the leaks.

“Did Hillary Clinton not say to these Brazilian bankers that she had this dream?” Tapper asked.

Kaine replied, “Jake, I have no way of knowing the accuracy of documents dumped by this hacking organization.”

Refusing to give up, Tapper told Kaine he could simply ask Clinton whether she made the remarks — but Kaine was noncommittal.