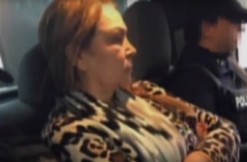 El Chapo’s alleged money manager was arrested Tuesday, Mexican authorities say. Guadalupe Fernandez Valencia is suspected of handling the illegally earned cash of Joaquin “El Chapo” Guzman, who was recaptured in January after months on the run. While his nickname means “shorty” in English, her alleged sobriquet is “La Patrona.” It means “The Boss.”

Like Guzman, the 55-year-old is wanted for extradition by the United States on drug charges. She’s accused of distributing all sorts of illegal drugs in the United States, American officials say. Cocaine, methamphetamine, marijuana, and heroin.

As for the Mexican authorities, they say Fernandez managed operations spanning the world, with links to Asia, South America, Central America, and the U.S.. She was pretty close to the top of the organization, reporting to Guzman’s son, Jesus Alfredo Guzman Salazar.

This was all done for El Chapo’s powerful Sinoloa Cartel. Guzman himself has been in and out of prison for years, breaking out of Mexican prisons twice. His January arrest may have been triggered by an interview with actor Sean Penn for Rolling Stone magazine.