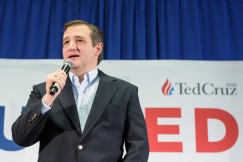 Donald Trump has a habit of causing controversy, and his remarks on Ted Cruz‘s Presidential eligibility have been no exception. Trump’s accusations have created an unwelcomed distraction for the Texas Senator and, now, several lawsuits across the country are seeking answers.

When Trump first floated the question over Cruz’s eligibility in a January debate, he did so nonchalantly, asking, “Do we want a candidate who could be tied up in court for two years? That’d be a big problem.” Classic Donald, stirring the pot and letting it sit. That’s when Cruz’s poll numbers rose and Trump turned up the accusatory rhetoric. Since January 17, Trump has made inflammatory threats of litigation over Cruz’s Canadian-birth and the question of whether Cruz is a “natural born citizen” five times.

It appears for Cruz, lawsuits, or threats of lawsuits, are coming at a faster rate then even Trump can threaten with. Legal scholars and the media have waffled over whether Trump actually has standing to sue Cruz, or seek a declaratory judgment on the question of his eligibility. However, it appears Trump has inspired some citizens and followers to do the dirty work.

Of the litany of filed suits, four in particular pass muster, either by creatively suing a state election board, scaring Cruz’s campaign into a response, or originating from lawyers in pursuit of more than political gamesmanship or political frivolity. Here’s what we know.

Derek T. Muller, an Associate Professor of Law at the Pepperdine University School of Law, has a complete tally of the pending “natural born citizen” challenges and litigation against Cruz—and Rubio for that matter—on his blog Excess of Democracy.

Additional challenges have been filed in Indiana, New Hampshire, New York, Alabama, Arkansas, and Vermont. Some of those have already been dismissed.

If nothing else, Trump has effectively shifted the attention away from substance and towards the ‘will he or will he not get kicked off’ reality TV flair of this election cycle, a strategy that suits the billionaire’s style well.