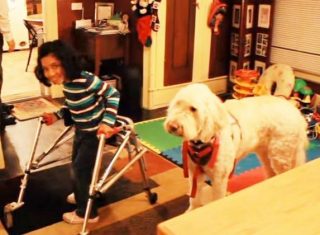 A 5-year-old girl born with cerebral palsy that severely affects her arms, legs, and body was told by her school that she could not use her doctor-prescribed service dog, Wonder, in class. Her parents sued, and on Monday, Ehlena Fry‘s case is going before the U.S. Supreme Court.

It all started in the 2009-2010 school year. According to court documents, Ehlena’s school district, Napoleon Community Schools, did not allow Wonder in class from October to April. After attorneys spoke to the school’s counsel, Wonder was permitted in class for a trial period at the end of the school year. However, the Frys stated in their complaint, the dog was not permitted to assist Ehlena in class. They claim that the school allowed the dog in the back of the classroom, but not to give the actual assistance that Wonder was meant to provide. After the school year ended, the Frys removed Ehlena from the school and opted to educate her at home, while they filed a complaint with the Department of Education’s Office of Civil Rights (OCR).

In 2012, the OCR ruled that the school violated the Americans with Disabilities Act and the Rehabilitation Act. According to court documents, the school agreed to take Ehlena back as part of a settlement of the OCR complaint, but they wouldn’t accept the OCR’s legal conclusion. After meeting with principal Pamela Barnes, also named in the lawsuit, the Frys did not feel comfortable sending their daughter, now 12, back to the school, and enrolled her somewhere else. The ACLU of Michigan then filed a lawsuit on their behalf.

At issue in the case is whether the lawsuit should be allowed in the first place. Ehlena’s parents sued the school system under the Americans with Disabilities Act, but the school says that a provision in the Handicapped Children’s Protection Act says that before filing a lawsuit, the Frys would have to exhaust all possible administrative remedies available under the Individuals with Disabilities Education Act (IDEA).

Courts in different jurisdictions have had conflicting opinions on this matter, but the lower courts in this case have gone against the Frys. The Supreme Court will now determine whether the Frys have to go through the process of exhausting all avenues of relief under IDEA, even though IDEA doesn’t allow for the relief that they want.

[Screengrab via ACLU of Michigan]