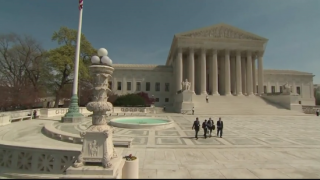 The U.S. Supreme Court has decided against hearing a lawsuit brought by Nebraska and Oklahoma over Colorado’s pot legalization.

When the Centennial State legalized marijuana via the enactment of Colorado Amendment 64 in November 2012, one of the unknowns was how regulated and legal marijuana would affect bordering states—the results of a contact high, if you will. Nebraska and Oklahoma claim that Colorado’s decriminalization has “increased the flow of marijuana over their borders.” The increased flow has forced the two states to expend greater “law enforcement, judicial system, and penal system resources,” thereby harming the states’ ability to allocate funding dollars to their own denizens.

The states filed a lawsuit seeking a court order to prevent Colorado from enforcing Amendment 64. The complaint states that Colorado’s state measure runs into conflict with federal law, which makes it illegal to possess even small amounts of marijuana. Therefore, Nebraska and Oklahoma believe Colorado’s amendment violates the Constitution’s supremacy clause, which says federal laws trump state laws. They allege,

a direct and significant detrimental impact — namely the diversion of limited manpower and resources to arrest and process suspected and convicted felons involved in the increased illegal marijuana trafficking or transportation.

Now, it appears that Nebraska and Oklahoma’s grievance will stop short of the Supreme Court. The Court turned away the lawsuit in an unsigned opinion, while conservative justices Clarence Thomas and Samuel Alito dissented, Thomas writing that “the plaintiff states have made a reasonable case.”

One interesting and lesser known wrinkle is that the case was never heard by lower courts. State disputes are sent straight to the Supreme Court where they are adjudicated.

“A state does not violate the sovereign rights of another state, by making a policy decision that parts ways with its neighbors,” Colorado said.

The Obama Justice Department led by Loretta Lynch urged the Supreme Court not to take the case. “Entertaining the type of dispute at issue here—essentially that one state’s laws make it more likely that third parties will violate federal and state law in another state—would represent a substantial and unwarranted expansion of” the Supreme Court’s jurisdiction.