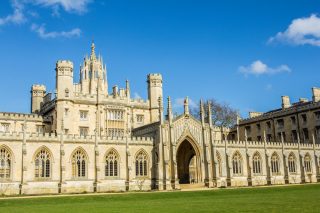 Three Jewish students at Cambridge University allege that they were accosted and attacked on campus, while their assailants shouted anti-Semitic remarks. After reporting the incident to school officials in October, however, they claim the matter is being swept under the rug.

Shlomo Roiter-Jesner told The Telegraph that he and two friends were walking into the university’s graduate union, when they were told to leave. Since the place was closed for a private party, they agreed, but that’s when things got ugly. “It was a closed party so we walked out but as we did so these individuals started getting more physical and more vocal and they noticed our kippot [Jewish head coverings],” he said. The party was being held by sporting societies of the university’s Christ College.

Another victim, who remained anonymous, reportedly contacted Professor Jane Stapleton, master of Christ’s College, the next day. He told her in an email, “We heard shouting and were literally grabbed and pulled out of the building by about seven large, intimidating males.” The email also described some of the language used towards them, including, “‘f—— Jew, you don’t belong here,” and “dirty Jew.” He also wrote that the attackers “proceeded to try and choke my friend with his scarf, leaving him gasping for oxygen, and to push me and the third friend around, despite our attempts to de-escalate the situation.”

Professor Stapleton responded by saying that the students could go to the police, but if they didn’t, the school would investigate the matter. “I assure you that Christ’s would regard any conduct of the type that you report as wholly unacceptable, deplorable and worthy of appropriate disciplinary action,” Stapleton said.

However, less than three weeks later, Stapleton said that just two students were disciplined and that the matter “is now concluded.” She told The Telegraph, “The internal investigation did succeed in identifying two Christ’s students who admitted using foul language and participating in a scuffle but they denied initiating the physical hostility and denied using any anti-Semitic or racist language. In relation to the former they were disciplined.” There was CCTV security footage of the incident, but it reportedly did not have sound.

Roiter-Jesner believes that the university’s response was not strong enough, as it didn’t even acknowledge the bigoted nature of the incident. “The college has not confronted the issue at all,” he said. “They have brushed it under the carpet.” This comes during a year where anti-Semitism has been felt by Jewish students at a number of campuses in the UK.

Stapleton denied that the university was hiding or downplaying anything, saying, “I reject categorically that Christ’s has engaged in a cover-up on this matter.”