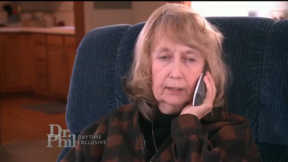 If you don’t know, now you know. The binge-worthy, Netflix zeitgeist Making a Murderer tells the exasperating story of Steven Avery and his nephew Brendan Dassey. The 10-part documentary series has given rise to numerous petitions (state and federal), a frenzied subreddit and a metastisizing sense of suspicion and hope that Avery is not guilty of the murder with which he has been charged.

One prominent figure in the series was Sandra Greenman, Steven’s girlfriend, who informed Dr. Phil that she and Steven recently broke off their engagement, among other details.

“I have broken the engagement. I hate to say this on air, but I did and it had nothing to do with the case whatsoever. It was a personal issue that I can’t get into and we don’t know what will happen when he gets out and I say when because I have every hope that he will be released…someday,” Greenman said.

A love story as old as time, Greenman sought out Avery following the trial. “It was something that I needed to do. I needed to show him that I was behind him,” she said.

“I was scared to death to go in that prison. I was afraid I wouldn’t have anything to say to the man for three hours.” Soon, love was in the air. “Three hours just went by like that. It just blossomed into a good friendship. Then it was more than that,” Greenman spilled.

Avery’s ex-fiance reiterated her faith in his innocence, “I asked him point blank…I personally believe with all my heart that he is innocent. I can’t stress enough that he doesn’t have the makeup to do something like this,” she said.

After Dr. Phil asked her if she would feel safe with Avery, Greenman stood by her man, “I would feel perfectly safe with him. I can’t see a violent side to him. It’s been 10 years and I have not seen it yet.”

While Avery’s potential marriage to Sandra Greenman may be on hold, her love and faith in him is not.
[Screengrab via TVEyes]