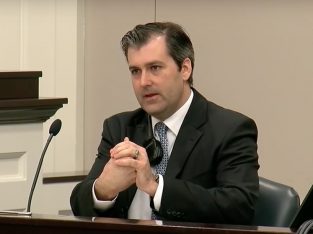 South Carolina Solicitor Scarlett Wilson, the lead prosecutor in the Michael Slager case, announced on Monday that she plans to retry the former cop as soon as possible.

Earlier on Monday, the judge declared a mistrial after the jury announced it could not reach a unanimous verdict in the case. Slager was charged with murder over the shooting of motorist Walter Scott after a traffic stop in 2015.

In her statement, Wilson expressed disappointment that jurors could not reach a decision in the case and promised to “try Michael Slager again . . . whenever the court calls.”

JUST IN: Prosecutor in trial of Michael Slager: “We will try Michael Slager again.” https://t.co/VuPdXgMuaa pic.twitter.com/SKheyLLVug

Attorneys representing Scott’s family also spoke out on Monday after the mistrial.

In a brief press conference held in front of the courthouse, Scott family attorney L. Chris Stewart told reporters Slager “dodged [conviction] by a hair,” before stating “he’s not dodging it again.” “The fight isn’t over,” Stewart said, “That was round one.”

In addition to state murder charges, Slager also faces federal charges that allege he violated Scott’s civil rights. The trial on the federal charges was supposed to begin in 2017, although it is now likely state prosecutors will get the opportunity to retry Scott before the federal case moves forward.

Slager’s lead attorney, Andy Savage, does not appear to have made any statements to the media following today’s events. However, he did address the jurors in the courtroom one last time and he thanked them for their service and for upholding the rule of law.

“The rule of law has to be preserved in this country, and you have done that,” Savage told jurors in his final remarks.