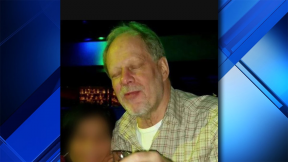 Authorities say the Las Vegas shooter sprayed 200 rounds of gunfire into the hallway when a security guard approached his hotel room, but the guard was only hit in the leg.

Sheriff Joseph Lombardo told reporters Wednesday that the wounded guard then helped a group of police officers clear out rooms on the 32nd floor of the hotel.

He says Stephen Paddock planned to survive and escape but didn’t say how.

Authorities say the Las Vegas shooter had 1,600 rounds of ammunition and several containers of an explosive commonly used in target shooting that totaled 50 pounds in his car.

Sheriff Joseph Lombardo told reporters Wednesday that he didn’t know what Stephen Paddock was planning with the explosives, if anything.

Lombardo also said none of the cameras Paddock put up in the hotel room where he unleashed gunfire onto a concert crowd were recording. Authorities say he set up cameras in the peephole of the door and outside the room to watch for police closing in on him.

The sheriff also gave a timeline of the shooting. The first shots began at 10:05 p.m. Sunday and ended 10 minutes later.