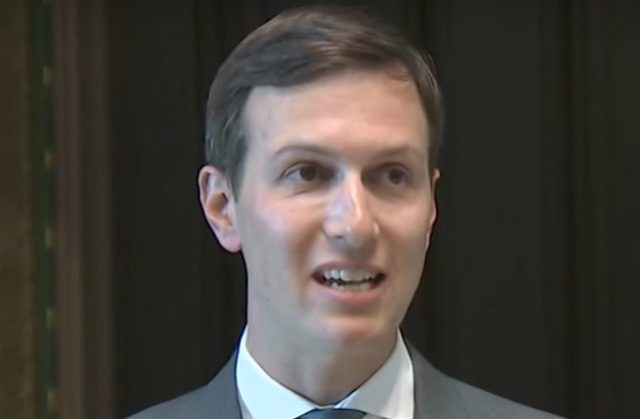 Jared Kushner‘s personal attorney Jamie Gorelick was the latest target of an online prankster who contacted her under a fake email address pretending to be Kushner himself. It all started last Saturday evening, when James Linton used the email address [email protected] to send Gorelick the message, “Our mutual friend Mr. McGahn is really stirring things up.” Gorelick replied that she could speak with him, since she already had to call him, and the two emailed back and forth a few more times until Gorelick stopped, saying they’d have to wait until Monday to talk more.

According to the National Law Journal, Gorelick used an iPad for the emails, and she couldn’t see the email address used by the other person, only that it appeared to come from Jared Kushner. Someone at Gorelick’s law firm, WilmerHale, told the publication that Gorelick suspected it was a fraud, which is why she stopped responding.

Linton figures he went a little overboard, which is what tipped her off. “I suspect the only reason the replies dried up was due to me pushing the bounds of reality and believability a little too far,” he said.

Gorelick isn’t the first Kushner lawyer to fall for Linton’s ploy, and she’s certainly not the the first Trump-related attorney to take the bait of an internet troll. Abbe Lowell of Norton Rose Fulbright, who represents Kushner for the Russia investigation, got caught up in an email conversation where Linton posed as Kushner, claiming to be worried about his private emails and adult content.

While Kushner’s attorneys fell for Linton, who posed as someone else, Donald Trump‘s lawyers previously fell for another troll who—as himself—goaded them into heated exchanges. Attorneys Marc Kasowitz and Ty Cobb were both targeted by Jeff Jetton, who elicited angry and profane responses from the lawyers, who just couldn’t help but get sucked into the conversations.

Linton, who is based in the UK, and Jetton, a Washington, D.C. restaurateur, collaborate on schemes, including this latest one with Gorelick.