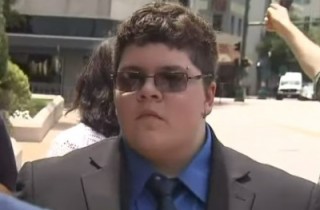 The U.S. Supreme Court is currently on their summer recess, but on Wednesday they issued an order regarding the case of Gavin Grimm (identified in court documents as G.G.), against the Gloucester County School Board. Grimm, a transgender boy, is currently fighting the Virginia board over being able to use the men’s room at school. The high court is still deciding whether or not to hear Grimm’s case, but the order says that in the meantime, Grimm will have to use the restroom according to his sex at birth, which is female.

The order, written by Justice Stephen Breyer, acknowledges that the U.S. District Court ruled that Grimm must be allowed to use the men’s room, and that the Fourth Circuit Court of Appeals agreed, but that until the case comes to its conclusion, the status quo should be maintained. Therefore the Court is issuing a stay on the District Court’s ruling. Grimm’s application to the Court is now granted, but the Court still has to determine whether to grant certiorari and hear the case. The stay on the District Court’s ruling will end if certiorari is denied. If the Supreme Court decides to hear the case, the stay will remain in effect until the Court issues a judgment.