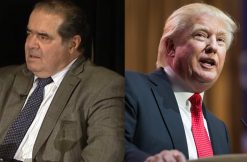 What would late Supreme Court Justice Antonin Scalia have thought about a Trump presidency? There’s one thing we can be sure of: He’d say the conflict-of-interest problems are a bad look.

Scalia worked in the Office of Legal Counsel as an assistant attorney general back in the Ford Administration. Kenneth A. Lazarus, Associate Counsel to the president, wanted advice on whether a federal regulation on conflict-of-interest—3 C.F.R. § 100.735-2(c)—pertained to the head-of-state and the vice president. The future Supreme Court Justice said no, it didn’t, but that still didn’t make it a good idea.

“Failure to observe these standards will furnish a simple basis for damaging criticism, whether or not they technically apply,” he wrote in the December 19 memo, the day businessman Nelson A. Rockefeller became vice president.

It wasn’t a mere intellectual exercise. Ford only took the oath of office in August, and he inherited a White House left battered by Watergate. The mere appearance of corruption could undermine an already shaken administration. It didn’t help that Rockefeller belonged to the Rockefeller family, and there were worries his business deals could signal corruption. That essentially got resolved after he let Congress examine his family’s finances and business in light of conflicts-of-interest.

“My sole purpose is to serve my country,” he told the Senate in a 1974 hearing. “I would not be influenced by so-called interests.”

42 years later, we’ve got a similar issue. Donald Trump is going to be president come January, but his international real estate dealings and investments have left him open to no small amount of criticism.

“This is pay-to-play at its rawest,” Congressman Raul Grijalva said in November about the president-elect’s investment in the company building the controversial Dakota Access Pipeline.

The future of the president-elect’s business dealing remain in doubt. He said during the campaign that he’d hand his business off to his adult children, but that fell short of divestment, which is more typical in this situation. He scheduled a press conference in which he’d explain things in more detail, but that got pushed back from mid-December to some unspecified date in January.

Scalia, 79, passed away in February. Trump is expected to nominate his replacement shortly inauguration.