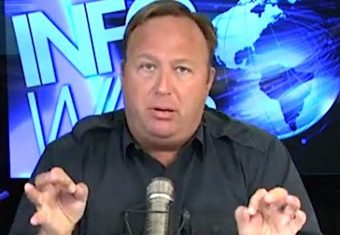 Then, Jones began testifying in his child-custody trial, only to learn that the best way to keep video tapes of his craziness away from the custody jury was to admit that his TV persona is really just him “playing a character”. Ouch.

Let’s back up for a minute. In case anyone out there isn’t familiar with Alex Jones, he’s the chief officer over at InfoWars.com – a news website on which Jones hosts a conspiracy theory program. Jones is famous for his absurd claims that the Sandy Hook shooting and moon landings were staged, the Clintons are possessed by demons, the 9/11 and Oklahoma City attacks were perpetrated by the U.S. government, and of course, that Pizzagate is a real thing. Compared to Jones, Tomi Lahren looks like Edward R. Murrow, and yet, thousands of lemmings who fancy themselves arch conservatives follow InfoWars with scary zealotry.

Shockingly, Jones was married long enough to have three children. Not so shockingly, Kelly Jones eventually divorced him and now wants custody of the kids. That brings us to Wednesday’s courtroom, in Austin, Texas, in which Judge Orlinda Naranjo had the bizarre task of ruling on the admissibility of various videos showing Alex Jones being his usual fanatical (also visibly allegedly drunken and weirdly naked) self.

According to The Daily Beast, the videos included one of a shirtless Jones speaking about “male vitality” and insisting that the FBI is spying on U.S. citizens, another of a allegedly drunken Jones proclaiming that “1776 will commence again,” and one in which he bragged about his ability to “drink a whole jug of Jack Daniels and not even show it.”

And that’s where Jones found himself in something of a pickle. His lawyers could make the good legal argument – that the videos showed nothing more than a satirical persona, that Jones was merely acting, and that as such, his performance was entirely separable from his true character as it relates to his parenting ability. But such an argument could (certainly should, if its patrons had any actual interest in truth) have serious consequences for the lucrative business that is InfoWars. If Jones’ lawyers admitted to his rants being nothing more than performance art, it would be awfully tough for Jones to credibly tell his audience otherwise. I mean, unless of course, that audience is Donald Trump, who has gone on record as saying that Jones’ reputation is “amazing.”

In the end, the lawyers made the smart legal argument, and Jones was characteristically unfazed by the concept of inconsistency. Attorney Randall Wilhite argued to Judge Naranjo, “This is political satire, it’s part of his show, it has nothing pertaining to the parent-child matter,” while on the same day, Jones himself told his audience, “They’ve got articles out today that I say I’m a fake, all of this other crap. Total bull! The media is deceiving everywhere. I 110 percent believe what I stand for.”

If that hasn’t given you vertigo yet, there was even more courthouse crazy. Kelly Jones’ lawyer discussed testimony Alex had given during his deposition in which the purportedly loving dad apparently forgot what grades his kids were in because, “he had a big bowl of chili for lunch.” Ultimately, the judge approved two video clips for viewing by the jury: one that included Jones’ twelve year-old son appearing on InfoWars, and one that showed Alex Jones smoking marijuana on comedian Joe Rogan’s live podcast in California (where such behavior would have been legal).

These evidentiary rulings are just the prelude.  As the Jones custody trial continues to heat up, we’re likely to hear more about how Alex Jones is accused of committing a felony by threatening  Rep. Adam Schiff (D-Calif.) after going on a profanity-laden tirade calling him “archetypal c—sucker.”  As in all custody cases, jury will be faced with deciding what custodial arrangement is in the best interests of the three subject children.  Whether Jones’ unhinged television “persona” and propensity for nutty behavior tips the scales toward his ex-wife may depend on whether his courtroom performance beats his radio ones.  One thing is certain, though.  This is bound to be one time no one complains about serving jury duty.